TechWorm
Home Hacking News
Facebook
Twitter
Pinterest
WhatsApp
The NSA leaks saga continues unabated.  In another startling disclosure in a report on Guardian today, it was revealed that the NSA’s partner-in-snooping, the UK’s Government Communications Head Quarters or GCHQ had targeted millions of Yahoo! users around the world and was actively intercepting their video chats and other webcam intercepts.  This operation was conducted by GCHQ under the codename ‘Optic Nerve’. 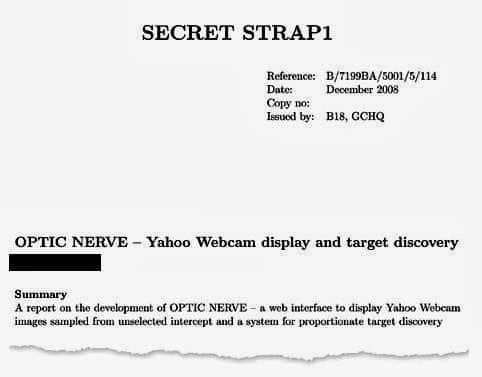 Yahoo has denied any collaboration with the security agencies or any denied prior knowledge about the Optic Nerve, it has issued a presser stating that this operation as a “completely unacceptable” privacy violation.  Its statement read,
“We were not aware of nor would we condone this reported activity. This report, if true, represents a whole new level of violation of our users’ privacy that is completely unacceptable and we strongly call on the world’s governments to reform surveillance law consistent with the principles we outlined in December. It further added,  “We are committed to preserving our users’ trust and security and continue our efforts to expand encryption across all of our services.”
GCHQ came out with its own statement in view of this article and said that all of its actions are in accordance with the law.  “All of GCHQ’s work is carried out in accordance with a strict legal and policy framework which ensures that our activities are authorised, necessary and proportionate, and that there is rigorous oversight, including from the secretary of state, the interception and intelligence services commissioners and the Parliamentary Intelligence and Security Committee. “All our operational processes rigorously support this position.”

GCHQ had gathered thousand of sexually explicit images taken from the webcam intercepts according to the latest revelation.  The report also goes on to state that many of these images were not gathered intentionally by GCHQ or were rather a type of collateral capture.
The Guardian report says that the operation, which the GCHQ called ‘Optic Nerve’ was done in active collaboration with the National Security Agency.  The report goes on to add that the ‘Optic Nerve’ may have stored images from the webcam intercepts between 2008 and 2010.   To judge the volume of the images captured and saved under this operation, it is estimated that one six-month period of 2008, the GCHQ gathered images from a whopping 1.8m Yahoo! users.
As with the other NSA leaks, this report also originated from documents leaked by whistleblower Edward Snowden. The Optic Nerve was so designed that it would automatically capture any sexually explicit content.  This very fact would be unnerving for many Yahoo users as at some point of time two intimate persons do show their intimate parts to the opposite person.
“Unfortunately … it would appear that a surprising number of people use webcam conversations to show intimate parts of their body to the other person,” it read. “Also, the fact that the Yahoo software allows more than one person to view a webcam stream without necessarily sending a reciprocal stream means that it appears sometimes to be used for broadcasting pornography.”
This information or leak raises doubts of privacy and secrecy of scores of webchats and video calls being made the world over by couples.
via