The local unit of hackers collective called Anonymous Romania today struck in Romania. It hacked the home page of the Romania’s premier Police website,  the General Inspectorate of Romanian Police. It posted the following message on the News Section.

“Greetings gentlemen. We are Anonymous. We are Legion. We are THE ROMANIAN PEOPLE or, of course, ‘ciumpalacii.’ Wake up, Romania!”

“Ciumpalaci” is a Romanian derogatory term that was once used by the ruling elite to address the protesting masses. 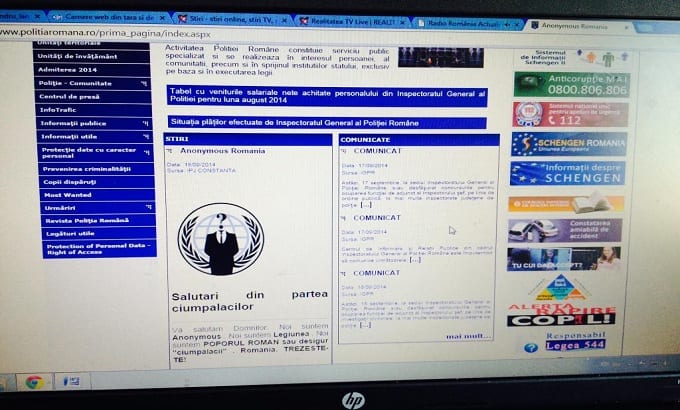 The Anonymous Romania may have been able to breach only the website interface and may not had access to the data stored on the servers, the officials investigating the matter stated.

“This morning, upon visiting the website of the General Inspectorate of Romanian Police (IGPR) an unauthorized post appeared. The site’s interface was the only thing affected by the breach, not the rest of the content,” the Romanian Police said.

The IGPR also said that the affected website contains only public data and information and was not connected to any police or criminal database. However experts feel that Anonymous Romania may have just wanted to leave a warning for IGPR and not wanted to steal any data.

Anonymous and the Romanian authorities

The Romanian cell of Anonymous has not been so active as are the other Anonymous networks across the world.  The last attack which Anonymous Romania undertook was way back in February 2012 when it had hacked the Romanian local site of the International Monetary Fund .

The site’s functionality wasn’t affected as a whole, but the home page did host a one-minute YouTube video of Anonymous and the “Hacked by Anonymous” classic message.

However the local authorities have a different story to tell.  They claimed that Anonymous Romania has been quite active in various online cyber crimes.