A video has been leaked seemingly showing the new Windows 9 Start menu in action.

It is similar to the Windows 7 Start menu, however, users now have the option to choose between two sections of the menu.

The first consists of a list of traditional apps in the left plane, and a new section on the right that consists of modern apps with ‘Live Tiles’ that can be resized into small, medium and large tiles.

The right section can also collapse to allow users to look around File Explorer.

As well as this, mouse and keyboard users can click an option to ‘use the Start menu instead of the Start screen’ for easier use.

This news comes after a series of screenshots of the new menu where leaked.

The ergonomics of the new Start Menu are quite similar to the old version, except the right pane shows a small vertical start screen instead of personal folders and system locations. Power options, user’s profile, and folders are now in the left pane (on the top) of the Start Menu. 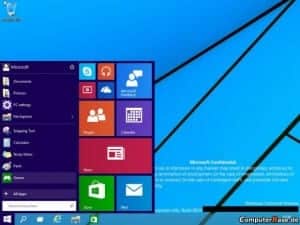 On the Taskbar, there’re two new buttons next to the Start button: the search and the virtual desktops. “Virtual Desktops” will allow users to run and switch between apps and groups of apps viewing one work space at a time like Apple’s OS X and Linux. 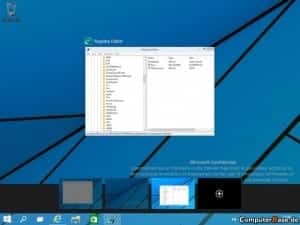 Earlier, there were some rumors that the Charms bar would be removed, at least for desktop users; however the Charms bar is still there – in this release – and can be turned on or off, although the window-ed apps will have the Charms bar options and app commands in Title bar context menu individually as per app’s contracts and extensions.

While far from complete, the Notifications center is finally added, which manages system notifications and alerts from different apps. The notifications list will appear at the bottom right corner and can be accessed by clicking the Notification icon – left to the system tray icons – in the Taskbar. Will it be able take action on notifications? The feature is still in question.

One other noteworthy change coming to Windows 9 is Internet Explorer 12 UI, reported by neowin.net. The Redmond developers are reportedly going for a complete overhaul of IE. The new Internet Explorer will be flat – as IE 11 – but the tabs will be shifted on the top of address bar like Google Chrome and Mozilla Firefox, while the back, forward and refresh buttons will be placed right before the address bar.

Additionally, the installation or deployment process is still same and makes use of the Windows Pre-installation Environment.

Reports also suggest that Microsoft will hold a technology preview of its new operating system dubbed ‘Threshold’ this autumn. So until then we will have to wait and see what the new Start menu will feature.