Nicole ‘Snooki’ Polizzi got a shock on the New Year eve, when she found out that her Instagram account had been taken over by unknown Arabic speaking hackers on Tuesday. 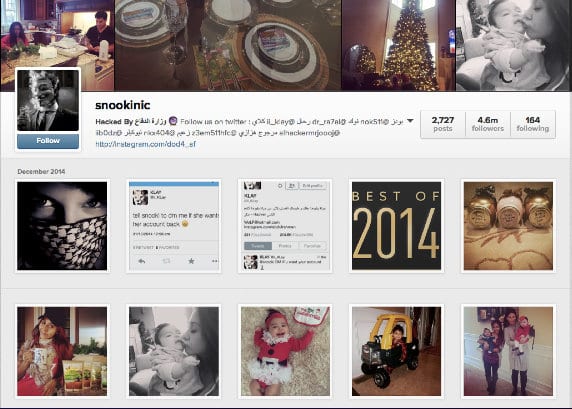 Nicole Elizabeth “Snooki” Polizzi is pretty popular American reality television personality and dancer who is best known for being a cast member of the MTV reality show Jersey Shore and currently stars in Snooki & Jwoww.  She has also appeared on many TV shows like The View, The Ellen DeGeneres Show, Jimmy Kimmel Live!, Late Show with David Letterman, and The Wendy Williams Show.

She was fairly active on Instagram posting around 2 to 5 images a day on the photo sharing website. The images she posted were normally about her kids, her workout and her life with husband Jionni. On 31st December however instead finding the normal snaps of her family and workout, she and her followers were greeted by a image containing Arabic language and someone wearing a headscarf.

The hackers also deleted most of Snooki’s 2,700 Instagram posts. The Snooki & JWoww star posted a video via Facebook for her followers, where she assured them that her account was hijacked and that that any new accounts opened with her name on them were fake.

If I could Instagram right now , this would be it. pic.twitter.com/x0sgtL0OWZ

The unknown hackers posted a message demanding that Snooki direct message them: “We are Arabic hackers, but that doesn’t mean all of the Arabic people are bad, please respect me respect my people or you’re going to be next.!”

Dude I get your playing this little game & it turns you on, but don't delete pictures of my kids. Have a heart since clearly you got balls.

Guys,I will let you know when my account is okay & ready to go! So sorry for all this annoying confusion! I will still be on @snookinic ONLY

Snooki’s ordeal ended after six hours of disruption.  Once she had claimed her account back she posted a video saying  “I’m back everybody! That was freakin’ weird. Let’s move on.” Luckily for her, all her images have been restored.