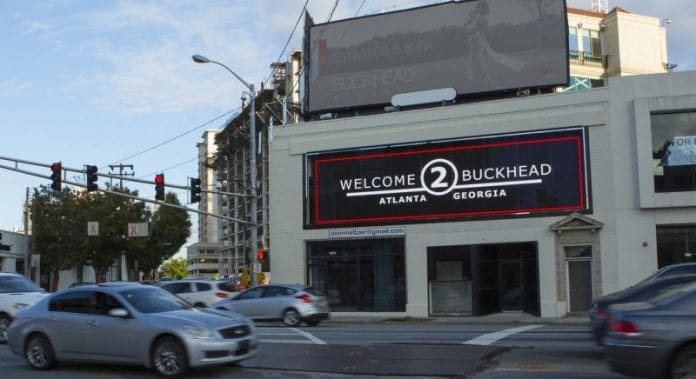 Images of a nude man on Billboard, flashing between the ads on the digital Bilboard between Peachtree and East Paces Ferry Road in Buckhead Atlanta left several parents with their children shocked.

The advertisement Billboard showed lewd image of a naked man between several other legitimate ads prompting the citizens of Buckhead to launch complaint with city council.

It is not yet known whether the ads were shown due to a hack or a prack. Atlanta City Councilman Howard Shook hoped that police will catch whoever is behind what he said is hardly an innocent prank.

“It is highly disturbing, aggravating, obnoxious and illegal,” said Shook.

The image displayed on the Billboard was disturbing enough for hundreds of citizens to call 9111. Sgt. Greg Lyon with Atlanta Police said officers responded and the power was shut off until the owner of the billboard arrived at the scene.

“The owner of Monumedia showed up and was able to fix the problem in terms of that image being displayed,” said Sgt. Lyon.

The case is now in the hands of the APD’s Homeland Security unit.

“They are trying to figure out if this was someone hacking into the computer system of the billboard or an inside job, like a disgruntled employee. We’re asking if this was a teen prank or something more sinister,” said Sgt. Lyon.

Police report states that the Billboard computer has been accessed by several individuals other than the employees of the Billboard owner, Monumedia. They are trying to ascertain which of this individual was responsible for the nude images on the billboard.

Yesterday, a group called “Assange Shuffle Collective” claimed responsibility for the hack on Reddit. The group said that the hacking was done is support of WikiLeaks chief editor Julian Assange.

“Ironically, we didn’t realize that Buckhead was an incredibly affluent neighborhood, which makes the whole thing terrifically good fun. Burn the rich,” the group posted on Reddit.

The FBI says they are trying to track the group, but it may be difficult. In another exchange on Reddit someone wrote, “Good luck not getting arrested!”

Buckhead Billboard wasnt the only billboard the group hacked. As per the group they have hacked many other billboards, however there is no news of other billboards in the US flashing such nude skits or other illegal stuff.

FBI commented that they are investigating the case.