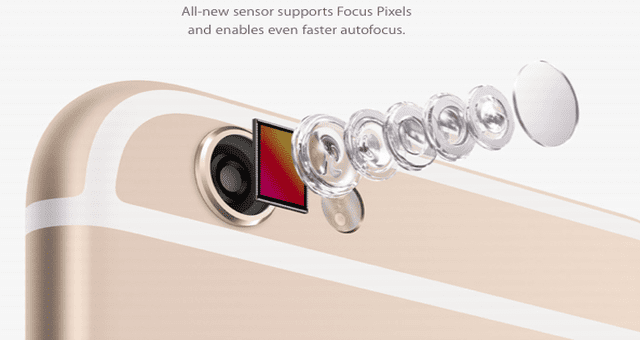 Apple’s forthcoming iPhone instalment which will either be an ‘iPhone 6s’ or ‘iPhone 6s Plus’ and even both, will have 12MP rear camera. This news marks the fact that Apple has formally joined the megapixel race.

Up until now, Apple has shied away from joining the megapixels club but with the forthcoming iPhone, it will join megapixel race with a twelve-megapixel iSight camera on the back of the new phone(s). Apple’s been using five-megapixel cameras on iPhones since the introduction of the iPhone 4s back in the fall of 2011. Apple had kept away from the megapixel race by opting to improve imaging capabilities of iPhones by introducing better lens, more advanced image signal processors, larger pixels and a number of software features which have improved image quality considerably.

Kevin Wang, an analyst with IHS’s Technology Research Director for China has “confirmed” that the new iPhone from Apple will have twelve-megapixel. Wang, however says that the pixel size in the new iPhone will be smaller which will raise questions about the camera’ performance in low-light conditions.

Although smaller pixels would represent a step back from the large pixels on current iPhone cameras, Apple may use other tricks to improve the next iPhone’s low-light performance, such as a more advanced image processing pipeline, a larger aperture and sensor size and more.

Other leaks have suggested that the next iPhone will have a dual-lens camera out the back with optical zoom rather than digital one. Apple may be opting for dual-lens camera to enable additional imaging improvements.

Another analyst from KGI, Ming-Chi Kuo  recently predicted that the new iPhone will have a twelve-megapixel sensor which seems to become true. Ming had also suggested that the forthcoming iPhone installment will feature a faster A9 chip with 2GB of higher-clocked LPDDR4 RAM, and come in a new rose gold colour option.