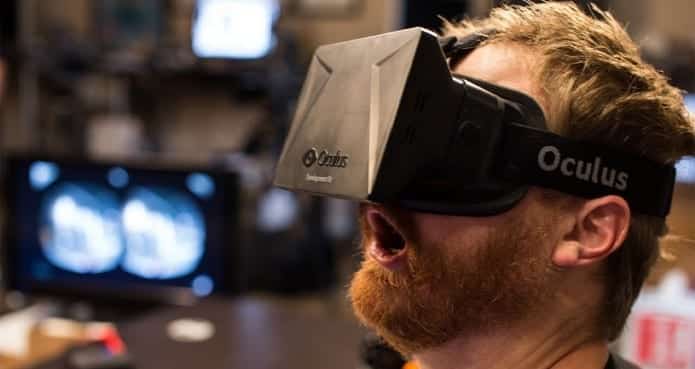 Virtual reality sex apps on new Oculus Rift headsets might not be on the horizon after all, it has emerged.

Just a few weeks after the co-founder said that the new VR headsets will allow NSFW material through its store; company insiders have finally slammed the brakes on this idea.

The Facebook-owned company will start selling its Oculus Rift virtual reality headset in the first quarter of next year. And it will operate its own app store (similar to Apple’s app store) so now the users can download games and other engrossing apps that will deliver the thrills of virtual reality. Oculus will reportedly vet which apps appear in its own store, and even rate the apps.

But one thing that has no place is Oculus’ brave new world is virtual sex. A company representative reiterated the Oculus position on the matter when we asked them about it on Friday: “Oculus only distributes developer content that meets their terms of service which forbid NSFW content from being a part of the Oculus Store,” the spokesman said.

Let’s play a Fair Game. But that got us into thinking, what about violence? If Oculus intends to make the world inside its headsets family-friendly, how will it handle violent content?

Here, Oculus had an interesting response:

“Oculus will only distribute developer’s content that will meet their terms of service, but they aren’t open to discuss what those terms are at this time.”

It’s a curious silence for an issue that’s not likely to remain hypothetical.

Gaming is expected to be one of the most popular uses of virtual reality headsets like Oculus, and many video games, from first-person shooters to fighting games, are inherently violent. But virtual reality will also open the door to other forms of entertainment, many of it more movie-like. That means the makers of gory horror movies will also gravitate to VR platforms like Oculus. Will Oculus draw the line on what level of violence is too much or how graphic the depictions of violence can be? It’s a good question; just don’t look at Oculus for answers right now.

Of course, this only applies to apps available through Oculus’ official app store. There will likely be unofficial app stores where users will be able to download whatever they want. But the rules for the official Oculus app store are important, since that’s how most mainstream consumers may experience virtual reality

David Starkey, no stranger to kicking up a controversy, has compared this Saltier to the swastika, and claimed the Scottish National Party treats the English in a similar way Hitler treated the Jews.

In an interview with the Sunday Times, the 70-year-old historian said: ‘What are the points of comparison?

‘Well, we have a political movement that has a single historic explanation for why your country is facing such terrible oppression – it’s either Versailles or the Treaty of the Union.

‘You have a particular group of people who are responsible for this; it is either the English or the Jews.’

And the historian, who once described Scotland as a ‘feeble little country’, continued to draw comparison.

He said: ‘you have as a symbol the twisted cross – the saltier or the swastika.

‘You have a passionate belief in economic self-sufficiency: known by the Nazis as autarky and the Scots as oil.

‘And also you have the propensity of your elderly and middle-aged male supporters to expose their knees.’

He added that SNP supporters, especially those south of the border, are ‘incapable of recognizing that this is National Socialism’.

She said: ‘He has become little more than a serial uttered of bile and bilge.

‘The independence movement in Scotland is entirely civic and peaceful – and last year’s referendum was a celebration of democracy.

‘David Starkey – who has described Scotland as a “feeble little country” in the past – has previously prompted outrage from the Glasgow Jewish Education Forum for similar comments, but it seems he has not yet got the message that there is no appetite for these unsavory and absurd views.’

Customers will be able to use Oculus Rift headsets able to interact and have sex with each other in virtual bars, bordellos and strip clubs.

Oculus Rift is cutting edge technology which allows people to use look round and interact with the virtual environment around them, simply by moving their headsets.

The ‘adult virtual world’ of Red Light Center was first launched online in 2005 and according to its CEO, now has over 25 million registered users.

How many of its customers will now use the expensive Oculus Rift headsets is yet to be seen.

Co-founder Palmer Lucky told the Silicon Valley Virtual Reality Conference and Expo that Rift would be ‘an open platform’.

He said: ‘We don’t control what software can run on it.’

But a spokesman from Oculus Rift told Business Insider that this is no longer the case.

But the company was less clear when pressed about violent games.

‘Oculus will only distribute developer’s content that must meet their terms of service, but they aren’t open to discuss what those terms are at this time,’ the spokesman said.

For the time being we can take it for granted that Oculus Rift headsets will not allow pornography; thus it will be Universal and user friendly to every user.