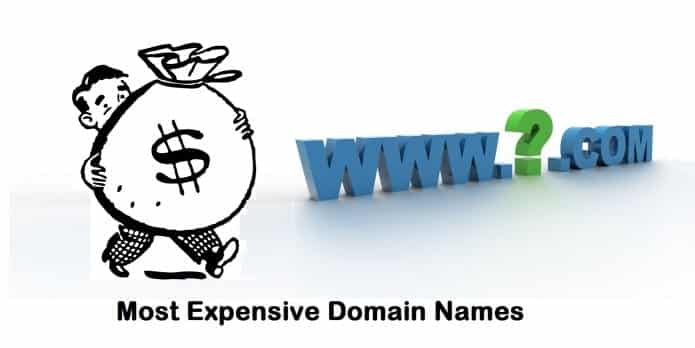 World’s 20 most expensive domains names which you cannot afford

It is a known fact that people create Website and then sell them for money. People also purchase exclusive Domain names and later sell them for a huge lump sum. There is a lot of money in Website flipping and Domain flipping and some people really make good money in this business.

People usually would buy the domains with a vision that it will fetch good value and thus this is a sort of investment for some who are involved in this business. What you need to do is, purchase a website or domain with some exclusive name and then wait for some time till it gains popularity or till you get some good buyer.

This article brings to its readers the Top 20 most expensive million dollar Domain names of all the time which have been sold till date. Surprisingly some of these sites were sitting for almost two decades and have been purchased recently; besides it was also found that all these sites fall in the ‘.com’ category. It was also found that gambling and sex related domains are the ones which have fetched one of the best prices!

Sold for $35 million and Year: 2007: The new owner of this website is Brain Sharples, CEO if HomeAway. Sharples confirmed he purchased the domain because he did not want Expedia, competitor of HomeAway to acquire it.

Sold for $ 16 million and Year: 2009: The domain name was purchased by marketing firm QuinStreet. It was the second highest deal of all times and this record was broken by PrivateJet.com.

Sold for $9.9 million and Year: 2008: Major purpose of this domain is financial service. Clek Media brokered a deal and it seems the domain was purchased by a company known as Fund.com, in the year 2008. However, after this all cash deal, the company seems ran in a lot of trouble and declared most of its financials unreliable in 2009. As of now if one checks the site it displays a white background with a phrase: “Please come back later to check FUND.com”. The domain thus is not live and there is no idea if the owner is waiting to resell the domain.

Sold for $8.5 million and Year: Nov 2010: Fb.com was purchased by Facebook from American Farm Bureau Federation. Presently, the domain has been redirected to www.facebook.com.

Sold for $8.9 million and Year: Feb 2015: Rick Schwartz, the ‘Domain King’ had bought the website from a college kid in 1997 for mere$42,000. Surprisingly, the kid had snagged the name for $5,000 just a week before. It seems the site earned more than $20 million in all, initially it earned over $10 million via parking and redirects without every providing actual adult content, as explained by Schwartz. The buyer of the site was a company in Prague that also owns Swingers.com and PornoTv.com.

Sold for $6.8 million and Year: Nov 2014:  The domain was owned by Nissan for its Z series of cars and then it was sold to Japanese domain biz GMO registry. Z.com was sold for $6.8m (£4.3m, 800m yen) thus placing it in the top ten of all time domain sales. Currently, there exists only three single character domain names and Z.com is one of these in the .com space.

Sold for $7.5 million and Year: 2006: Currently, the domain is in use and acts as an online shopping site for diamonds. This shows why the buyer paid a huge amount for the domain name, well he is actually using the site to sell the precious stones!

Sold for $5.5 million and Year: 2007: The domain was purchased by Mansion Limited of Gibraltar and has proved to be a great investment for the new owner.

Sold for $5.5 million and Year: 2010: The site was purchased by a Russian online gaming site known as Bodog who also created new game on this domain. Originally the domain name was registered way back in 1995 and is being used as an online gambling portal. Seller’s identity was not disclosed.

Sold for $5.1 million and Year: 2009: Initially as a part of bankruptcy court proceedings the site was sold for $1.25 million. After some days the site was put up for auction and then Toys R Us surprised everyone when it was able to shell out $5.1 million.

Sold for $5 million and Year: 2008: Zappos, a shoe company bought the domain Clothes.com. Now, both Zappos and Clothes.com are owned by Amazon and Clothes.com still directs users to Zappos’s apparel selection.

Sold for $4.8 million and Year: May 2014: As per Domain names sales report, the domain Medicare.com has been bought by eHeathInsurance.com. Further, the company has paid $4.3 million in cash and $300,000 in debt as per the reports.

Sold for $4.7 million and Year: Sep 2013: The domain was earlier owned by Brazil search engine iG and was purchased by London’s IG Group. Igloo/NetNames helped to sell this domain.

Sold for $4.5 million and Year: 2011: After acquiring the ‘iphone.com’ domain Apple was searching for all the domains with prefix “i” and ultimately it acquired this domain. Though for Apple this deal seems to be sort of peanuts!

Sold for $3.1 million and Year: March 2014: The domain was purchased way back in March 1995 by Michael Castello. As per Castello he had registered it for free! He also wrote in DN Journal: “I always liked Scotch whisky, but the real reason I registered Whisky.com was because of the Whisky a Go Go night club in Hollywood. I always enjoyed ‘The Whisky’, with its musical heritage and scene where the likes of The Doors and Janis Joplin played. Years later, I even offered Whisky.com to the owner’s son and he told me he didn’t need it since they already registered WhiskyaGoGo.com. That rejection would prove to be good for me.” Finally in 2014, Whisky.com was sold by Castello Cities Internet Network in a domain-only sale.

Sold for $3.6 million and Year: Apr 2014: Xiaomi, the Chinese smartphone maker purchased this domain through a private sale. This was one of the most expensive purchases by a Chinese Internet company. Xiaomi contemplates to use this as their brand name as it is much easier to remember.

Sold for $3 million and Year: 2009: The owner of this domain, Rick Schwartz sold Candy.com to G&J Holdings for an amount of $3 million in 2009. Greg Balestrieri and Joe Melville own the G&J Holdings, a candy company. The cousins wanted a simple domain which could provide easy access to sugary sweets online and hence they purchased this domain.

These are just Top 20 domain names given here, there are many others in the list which can be found in the DN Journal. If you own an website which has similar sounding domain, you may just be sitting on a goldmine your self. Do value your website to find out the real price of your domain and inform us if you mint millions from it.