OnePlus, the Chinese smartphone maker has finally launched the OnePlus 2, the second version of its flagship killer amidst much hype and fanfare. The OnePlus 2 will go on sale in India, Canada, the US, China, and select EU regions from August 11. The smartphone is expected to go on sale in rest of the world and Southeast Asia in the last quarter of 2015.

The pricing details for all the countries is given in the image below : 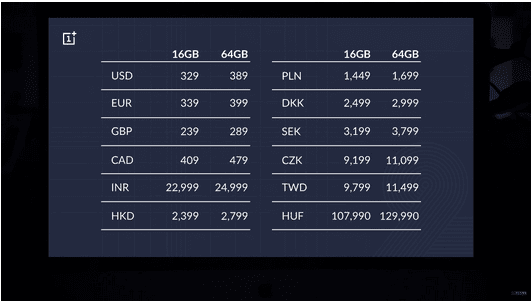 To help users experience the new OnePlus 2, OnePlus has promised that it would host pop-up events in 9 cities namely Bangalore, New Delhi, Jakarta, Milan, Berlin, Paris, London, New Work, and San Francisco on July 31. Visitors will get to try out the OnePlus 2, ask questions, and could even win an invite. The first 50 visitors will get a gift bag. Information regarding the venue addresses can be found on the OnePlus forum.

On the photography front, it will feature a 13MP rear camera with a 1.3-micron for the image sensor, laser autofocus, Optical Image Stabilization (OIS), dual-LED flash, f/2.0 aperture and a slow motion mode as well. It will also feature a front camera of 5MP

OnePlus 2 runs OxygenOS, the company’s custom OS with Android 5.1 lollipop. OnePlus says Oxygen OS has subtle customizations like on “screen gestures, dark mode, the ability to switch between hardware and capacitive buttons and toggle quick settings.” For quick access to custom notification settings, the OnePlus 2 also has an alert slider, which can also silence the device with a simple click.

In addition to the OnePlus’ signature Sandstone Black, there are actual wood built Bamboo, Black Apricot, Rosewood and even Kevlar covers as well available with the OnePlus 2.

Some distinct features of OxygenOS include a new camera app with super resolution mode, time lapse, and slow motion; the ability to set app permissions; an audio tuner; customizability with support for icons packs, and a file manager, the option to adjust icon grid size, a Dark UI mode, personalize the LED indicator, and the ability to select accents.

The company also disclosed some details at the VR launch event regarding the design of the OnePlus 2 that the smartphone is made of aluminum-magnesium alloy frame and jewelry-grade stainless steel.

Commenting on the OnePlus 2 launch, Vikas Agarwal, General Manager – India, OnePlus, said, “The future battleground for all things innovation and technology has begun and OnePlus with its latest offering is all set to lead the next generation of smartphones. India is an important market for us and our fans are sure to get their hands on OnePlus 2 simultaneously with the rest of the world.”

To buy the device, OnePlus 2 will require invites. However, this time the company is promising a reservation list, more inventory and a “quicker rollout of shareable invites.” The company says that the first couple of OnePlus 2 invites will be given to the earliest supporters, forum members, early OnePlus buyers. To help other users get invites, OnePlus will also have contests and/or other promotions. The reservation list which currently has 411,028 on waitlist can be viewed here.

In addition, there is a reservation list and user have to sign up their email address to get on the same. If there are any unused invites, then these users who have are on the reservation list, will the chance to buy the OnePlus 2 when it is available. “Everyone on the list will eventually receive an invite,” says OnePlus.

OnePlus says that the OnePlus 2 may take up to 3 weeks before it is ready to ship. The company says that OnePlus 2 invites will be valid only for 24 hours, after which the invite would expire. To share invites, a user will get 1-2 weeks and initially the number of shared invites that can be sent out will be low,. However, it will increase as production builds up. “The more you share, the more invites to share you get,” says OnePlus.