App takes photo of user and holds phone to ransom

Adult Player, an Android app masquerades as a pornography app, but once installed, it secretly takes photos of users with the phone’s front-facing camera, according to security firm Zscaler.
The app which has all the features of a ransomware, locks the screen and demands a payment of $500 before it will let you use the device again.
According to Zscaler, once installed and opened, the App snaps a photo of the user from the smartphone’s front facing camera. Then it proceeds to lock the screen and display’s the victim’s photograph on the ransom screen along with the message.

The App is not available on Google Play but spreads through phishing and directly from the developers own webpage.

Though the app classifies as a ransomware it is still a far cry from the full fledged PC ransomware like Cryptolocker.

To promote it self, Adult Player app claims to offer adult NSFW videos, but actually holds the user to ransom, after asking them to give it permission to lock their phone.

Once the screen is locked, the App display’s a warning message purporting to be from the Federal Bureau of Investigation stating that authorities had detected “forbidden pornographic sites” and that the device has been locked. 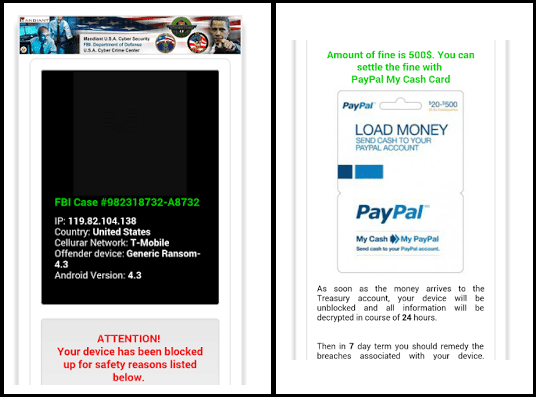 Zscaler specialists advised any person that had downloaded “Adult Player” to restart their smartphones in a safe mode, which would run only the device’s operating system without any external programs, thus allowing users to delete the malware.