One of the major disadvantages of Android was fragmentation. This means that due to carrier or OEM delays, the release of the latest version of Android that is ready gets released only several months later. It could so happen that sometimes your friend with the same phone on a different carrier would have been able to receive it weeks before you do. 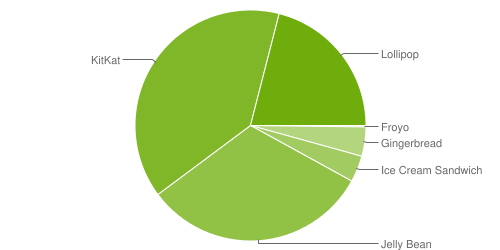 It was starting to look like Google was going to skip another month of dashboard updates. However, Google has been trying hard to fight fragmentation. Last month, Google revealed that the newest versions of its Android OS – the 5.x Lollipop releases – were installed on 18.1% of active Android devices. This calculation takes into account both Android 5.0 and Android 5.1 installs, since both of those versions are named Lollipop.

The latest official figures from Google have been collected during the seven days up to and including September 7. It shows that Android 5.0 has grown very slightly over last month, from 15.5% to 15.9%. Version 5.1 saw a larger increase, almost doubling from 2.6% to 5.1%, giving a combined total for Lollipop of 21%. This means there is a 2.9% increase from last month, and an 8.6% leap from June 2015. 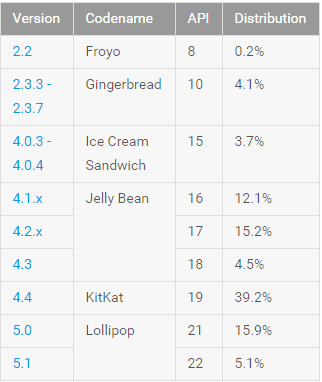 All of the above is an indication that the rate of adoption of Android 5.x Lollipop is moving along rather nicely and has shown a relatively smooth growth in the past few months. However, it’s the version that came before Lollipop, Android 4.4 KitKat, that continues to rule the roost. Leading with 39.2% of installs, KitKat is followed by the three Android Jelly Bean iterations that collectively have 31.8% market share.

With Android 5.x Lollipop starting to account for more Android devices, would mean that older versions are on the decline. Android 4.4 KitKat has dipped by 0.1%, while Android Jelly Bean has dropped from 33.6% to 31.8%. Android 4.0 Ice Cream Sandwich has also declined by 0.4%. Where it has taken Lollipop a long time to gain even this much ground, there are chances that it might start going down as Android 6.0 Marshmallow begins to roll out in Nexus devices soon.