Ever since Mark Zuckerberg announced his decision to donate 99 % of Facebook stock to “charity” on the occasion of birth of his daughter, Max, social media platforms including Twitter and Facebook are agog with complimentary posts to Zuckerberg and his wife’s philanthropic goals. But a very few know that Zuckerberg’s plan to give 99% to charity is a shrewd business plan. How? Check it yourself.

The vehicle for his beneficence will be the Chan Zuckerberg Initiative LLC, a family-run foundation that he controls and through which he will maintain control of Facebook for “the foreseeable future.” What this means is that Mark Zuckerberg will be transferring ownership of his Facebook stock without paying capital gains taxes to the US Treasury. Further, in doing so he will also safeguard his foundation and Facebook from future estate taxes.

As BuzzFeed’s Alex Kantrowitz reported, the Chan Zuckerberg Initiative, the organization that the couple’s fortune will go to, is structured as an LLC, a limited liability company, not as a nonprofit organization. Facebook has since confirmed to BuzzFeed that the charity initiative is indeed a LLC.

While there is no denying that Zuckerberg’s trust will certainly undertake philanthropic endeavours, it may not be its only one. The money, according to a Facebook SEC filing, will go to “philanthropic, public advocacy, and other activities for the public good.”

One such profiteering activity is private investment. A Facebook release this afternoon stated as much.

“The Chan Zuckerberg Initiative will pursue its mission by funding non-profit organizations, making private investments and participating in policy debates, in each case with the goal of generating positive impact in areas of great need,” it said. “Any profits from investments in companies will be used to fund additional work to advance the mission.”

Further, The couple will choose where the money goes, but wrote in a letter announcing the organization that “initial areas of focus will be personalized learning, curing disease, connecting people and building strong communities.”

The Facebook founder is not giving away 99% of his Facebook shares all at once. He will be doing it over the course of his lifetime.

Also, Michael Maiello from Daily Beast says that Zuckerberg will immensely benefit from the charity plan. According to Maiello, Mark will deduct the fair value of his gift to his foundation from his taxable income in the year he makes the donation. A donor like Mark could realize a tax benefit equal to about one-third of the value of his gift. In this case, he stands to benefit as much as USD 333 million, based on the USD1 billion he plans as his first transfer.

To sum up, his money is not going to a charity, but to his own LLC, which will let him evade tax by moving his private assets into a foundation controlled by him. While there is no denying that a part of this money will be used to help the unhelped around the world, but, seeing it through the prism of charity is not feasible. The end goal of Zuckerberg is to earn massive tax benefits and at the same time do whatever he and Priscilla want. 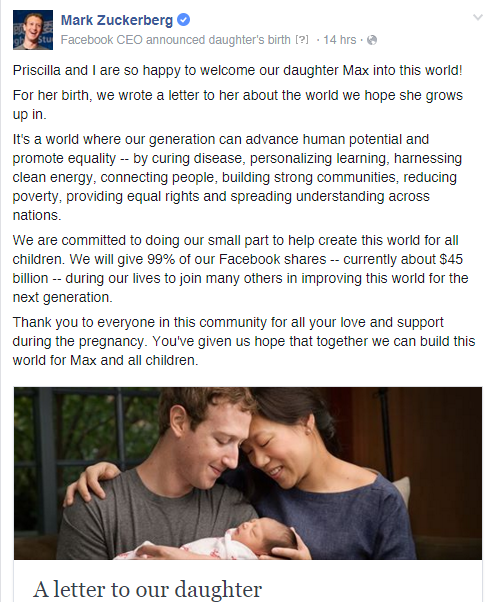