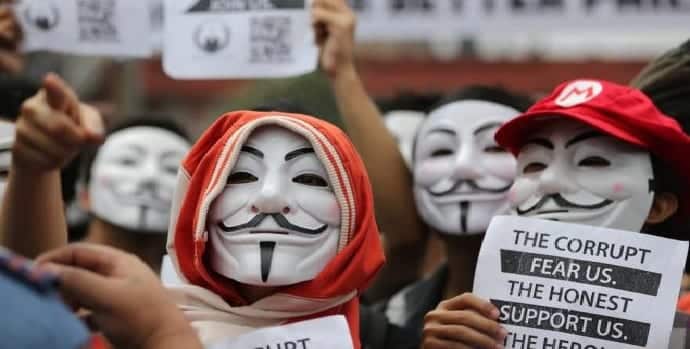 The Hong Kong chapter of the online hacktivist group, Anonymous has warned China of mass cyber attacks against its online websites over missing publisher Lee Bo. Lee Bo is a top book publisher from China with a series of hit novels and has been missing since 3rd Jan, 2016 and is presumably in the custody of Chinese PLA.

Anonymous’ Hong Kong division posted a video on Facebook on Saturday, threatening to hack Chinese government and police websites in honor of Lee, presumed to have been abducted by mainland authorities last Wednesday. Watch the video below:

Anonymous has also posted a message on Sunday night, claiming that its Hong Kong division was in the process of working with overseas teams on the planned attacks.

Lee and his four colleagues — believed to be disappeared as a result of their work at the Causeway Bay Bookstore, known for selling banned works critical of the Communist Party. Ever since his disappearance became known, there has been a huge outcry in Hong Kong.

In light of the threat from Anonymous, a statement from supposedly Lee himself emerged yesterday with a Causeway employee receiving a fax, the contents of which are consistent with Lee’s last contact from Shenzhen immediately following his disappearance, in which he explained to his wife that he was assisting mainland police with an investigation.

Since I am in urgent need to handle the related issue, and as it cannot be told to the outside world, I have returned to the mainland by my own method to assist the investigation by related authorities – it may take some time.

Please continue to run the bookstore as per contract, you can contact my wife for the payments due for books, or you can pay them, and clear the amount when I come back.

My current situation is good, everything is normal. Please kindly handle the things at the bookstore, many thanks!

It remains to be seen what action Anonymous take against China in coming days.