This is what the job interview process look like at Google, Facebook, Apple, Amazon and big tech companies

According to the career site Dice, a record 78% of recruiting managers expect more hiring in the first half of 2016, as compared to the second half of 2015. In other words, there would be numerous job openings that can be filled by job seekers ranging from entry-level to executive. Currently, U.S has over 100 occupations that have more job postings than actual hires month over month, reports CareerBuilder. The combination of these two factors certainly makes it a great time to be hunting for a job.

Even that level of demand regrettably isn’t making the time to hire a qualified candidate any shorter. For those who are about to start a search, expect it to take a long time. According to a recent report from Glassdoor Economic Research, the average interview process now takes 23 days, which four years ago was 13 days. 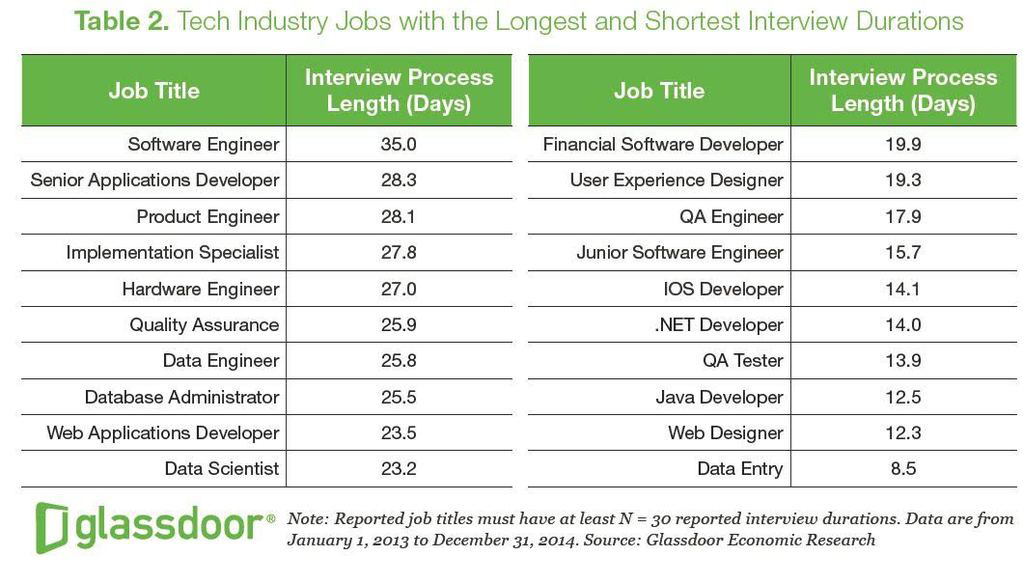 So, what is the reason behind this? According to the research by Glassdoor, the duration is become lengthy due to factors like the size of the company, location, and more severe screening processes factor that adds to the time taken to get an offer. Tech jobs, which are the most in-demand this year, unluckily have longer waits than average. According to Glassdoor, the interview process for a software engineer could take more than a month (35 days). Closing behind is the job for product engineers and app developers that takes 28 days of interviewing.

If just reading about the time it takes to be “on” for a potential employer is fatuiging, it’s about to get worse. The researchers of GetVoIP, a cloud communication adviser, did a study of at least 100 reviews on Glassdoor to recognize trends in the overall experience in the hiring process for a software engineer position at 13 popular tech companies.

Speaking to Fast Company, Alex Heinz, who does community outreach at GetVoIP, said “We placed the most emphasis on interviews posted in the past two years (2014—2015), though we realize that the interviews could have been conducted at an earlier date and posted about later.” He also pointed out that it might have been interesting to include companies such as HP, Samsung, or Dell might, but they were not. “There wasn’t enough information available for us to feel confident about their hiring processes,” he says.

Generally, the analysis exposed different trends in the interviewees’ experience. For example, IBM, Cisco, and Yahoo begin a phone interview, while seven of the 13 companies start off the process with a screening call. Only Amazon and Twitter require the applicant to complete an online assessment before moving to a phone conversation. In the case of Amazon, the initial online test is followed up with a second online assessment. Each company after completing assessments and phone calls keep the on-site interview as the last step. By the way, only Yelp applicants reported doing Skype interviews.

This phoning and testing process draws a lot of negative feedback from the applicants, as these processes takes between two weeks to a month at these companies. Instead, GetVoIP’s analysis showed that drawn-out processes didn’t impact an interviewee’s experience. “While Cisco, Yahoo, and Uber had the shortest interview process of two weeks, only interviewees at Cisco had an overwhelmingly positive interview experience,” writes GetVoIP’s founder Reuben Yonatan.

Similarly, easy interview processes don’t always convert to a positive experience, and a more challenging one does not essentially lead to more discontented reviews. 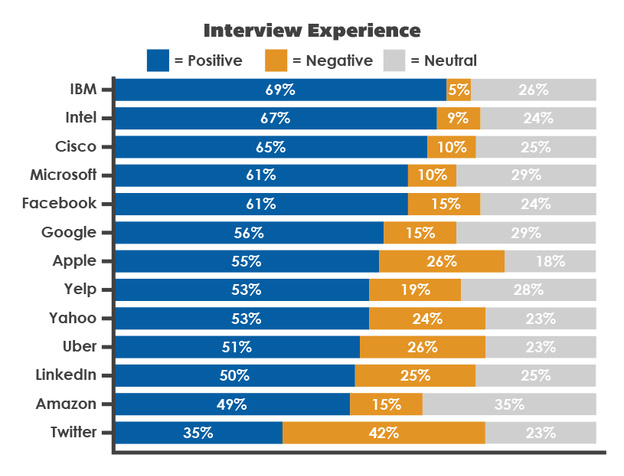 Those who went through the interviewing process at Amazon this summer reported fiercely positive experiences, in spite of its corporate culture. Even though it was rated one of the most difficult to get through, 49% of reviews were positive, while only 15% were negative, and the rest were neutral. Similar results (51% positive) were noticed for Uber even though the company and its leadership have also been criticized recently. For giving candidates an overall good experience, IBM scored high marks that got the company 69% positive ratings and only 5% negative.

On the other hand, Twitter with 46% was the company that drew the most negative feedback among applicants. That leaves both Apple and Uber with a tie at 26%. 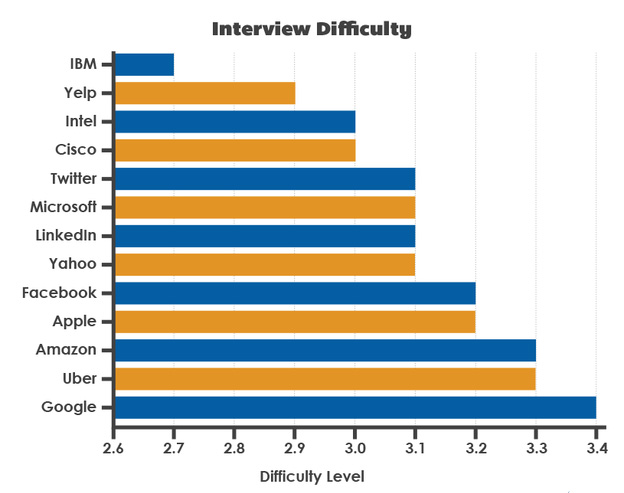 While the data is specific to software engineers, Yonatan confesses that it is a good indicator of how diverse the hiring process is today in a range of industries. Thanks to video resumes and interviews, location is no longer a deal breaker to qualify for a position, reports Fast Company.

Says Yonatan: “Today, there are multiple rounds of phone/Skype screenings and test projects before you even qualify for an onsite interview.”