After The Pirate Bay added torrent streaming as part of their service, naturally, it did not take long for Kickass Torrents to follow the same approach. With the launch of Torrents-Time, OS X and Windows running machines will effortlessly be able to run this software and seamlessly be able to stream the content for the user without need for an external torrent client. However, while this may be considered as an advancement, others warn of a dark cloud that might hover above them in the near future.

First things first, streaming on Kickass Torrents is a lot different as compared to streaming on The Pirate Bay. The primary difference here is the process is extremely simple and straightforward on Pirate Bay, since all users have to do is press a button marked ‘stream it’. On Kickass Torrents, users wish that it was as simple. Members of Kickass Torrents that actively log into the site on a daily basis will not be able to see this feature; only non-members will be able to see this feature, suggesting that the KAT team are categorizing this as an advert. 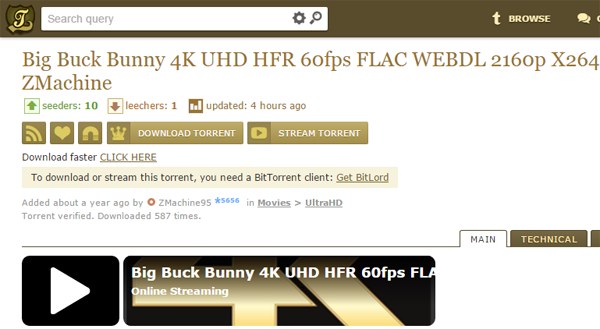 Even though the feature has been added and in the process, Kickass Torrents has become the largest torrent site on the planet to implement it, the team is being met with a large amount of resistance, as stated below:

“Kickass Torrents (Kat.cr), the biggest torrent site on Earth have embedded Torrents Time as of NOW. We launched last week and in a few days changed forever the way people use the treasures found through torrents sites, directly from their browser.

It means that from today on, any user who is able to use Facebook can enjoy almost any movie or TV show that was created in this world. Torrents Time is revolutionizing the world of torrents, here and now. Because it’s a revolution, you can expect a bloodshed, like the fate of all revolutions. We already managed to get a cease and desist letter from BREIN.”

According to the team, BREIN believes that Kickass Torrents have been motivated by sheer greed, although the team has continuously stated that the rising tide of change with viewing online content will be going through a constant cycle, and Torrents Time is the first portal of change. Naturally, we will have to sit out and wait for the response for BREIN, but let us hope that a storm does not end up coming their way and shutting the whole thing down.