The hacking arm of ISIS, Cyber Caliphate has claimed responsibility for a series of online attacks and falsely boasted that they hacked Google. The hacking group which calls itself the “Cyber Caliphate Army,” vowed in a post on the messaging app Telegram, which is popular among ISIS supporters, that they would attack Google on Monday. “Keep the promise inshallah (God willing), expect us today,” they declared,

However, within hours their promise fell through as Google remained untouched. They instead defaced the website https://addgoogleonline.com, registered in the name of Gandani K. from India. On Monday morning, the site displayed the logo of the hacking group, and played an Islamic State song in French. “Hacked By: CCA,” the defaced website said. 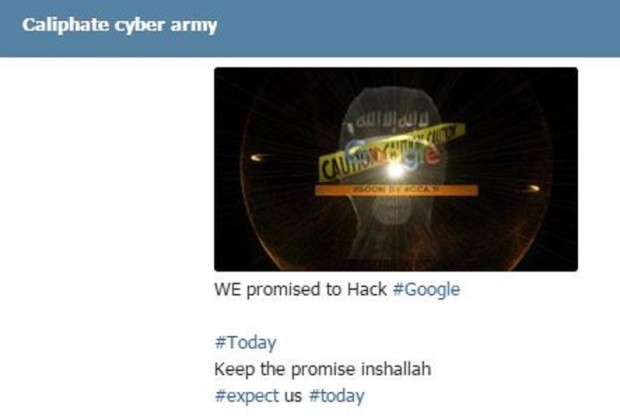 Cyber Caliphate published a list of the websites it had managed to hack through Monday. While Google stood out prominently in the list, the list also contained 35 British websites that it allegedly targeted. Almost all of the websites listed in the Telegram message belonged to random collection of small businesses’ websites. Cyber Caliphate said that the sites were hacked to avenge the killing of British jihadist Junaid Hussein, who died in a U.S. airstrike last year.

According to Vocativ, the sites targeted by CCA included those of a salon, an instructor who offers Japanese dance classes and businesses selling bedroom furniture and laminate flooring.

Windows 10 October Update Is Breaking Some PCs [ How To Fix? ]