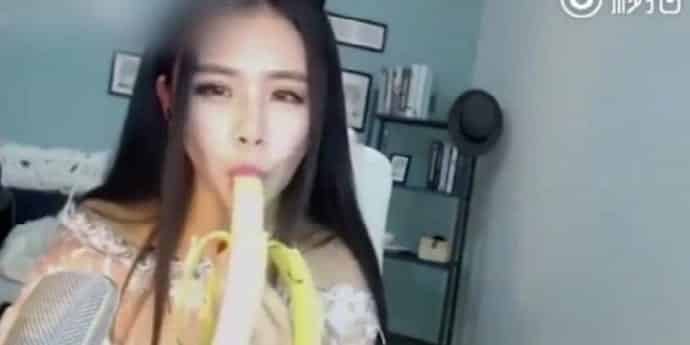 According to the new ruling hosts of the live-streaming sites are now required to monitor all their output every minute of the day, but it is not clear how they will be able to enforce the ban. The authorities have also banned wearing stockings and suspenders during a live-streaming.

The move comes a month after the Ministry of Culture announced it was investigating several live-streaming sites, including Douyu, Panda.tv, YY, Zhanqi TV, and Huya, for allegedly hosting pornographic or violent content that “harms social morality”.

The banning of eating banana has bemused many social media users, with some wondering how authorities decide what is “seductive”.  “How do they decide what’s provocative when eating a banana?” a social media user questioned, according to the BBC. Another wondered: “Can male live-streamers still eat them?” While others suggested that hostesses should try cucumber or another fruit/vegetable to circumvent the ban. “They will all start eating cucumbers, and if that’s no good, yams,” quipped one user.

Chinese one party government is strict on enforcing such bans. It has the resources and wherewithal to implement such bans but it remains to be seen if the eating banana ban is as easy and successful as blocking Chinese citizens access Facebook or Gmail.