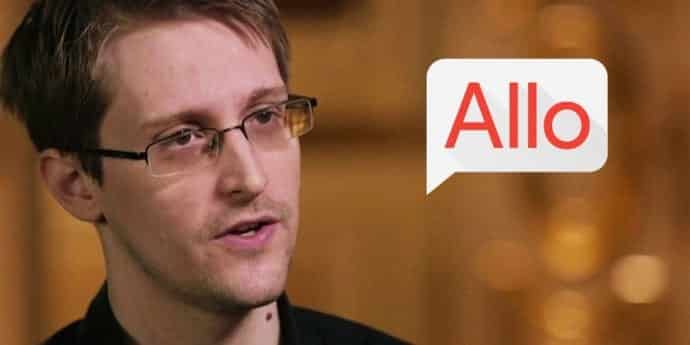 Edward Snowden wants you to stay away from Google’s new messaging App, ‘Allo’

Privacy savants have already termed it as a snooping bot for ‘Google.’ Meet ‘Allo’ the end-to-end encrypted messaging app that Google announced at its I/O developer conference this week.

Allo’s USP is that AI integration Google Knowledge Graph will bring to it. This will allow users to send custom messages which Allo will analyse from the user’s past usage.  Allo is capable of analyzing images in your chat and sending out smart replies just like you would normally do in a standard communication.

The problem with Allo is that Google added its “incognito” mode and end-to-end encryption is only as an opt-in feature, rather than as a default setting. That decision has raised the hackles of privacy advocates including the serial whistle blower and former NSA contractor, Edward Snowden.

Google's decision to disable end-to-end encryption by default in its new #Allo chat app is dangerous, and makes it unsafe. Avoid it for now.

Snowden found Allo to be a privacy nightmare and tweeted to his followers why he thinks so. He said that though Google Allo is equipped with end-to-end encryption but the company has kept this option off-by-default, which is really bad and in fact, quite bizarre given that almost all major messaging apps like WhatsApp and iMessages, etc., which are encrypted.

To make matters worse, one of the engineers who helped design Allo’s security wrote in a blog post that he wished the end-to-end encryption feature were always on. “I’m pushing for a setting where users can opt out of cleartext messaging,” he said. Soon after, the coder’s comments disappeared

This confirmed what Snowden and other privacy savants have been saying. Google has disabled end-to-end encryption for some specific purpose.

Dan Goodin at Ars Technica has a great side-by-side analysis of the alterations made to the engineer’s essay post-publication. This seems to confirm the privacy advocates worst fear. There is something fishy about Allo.

Better to heed Snowden’s advice and avoid Allo for now.