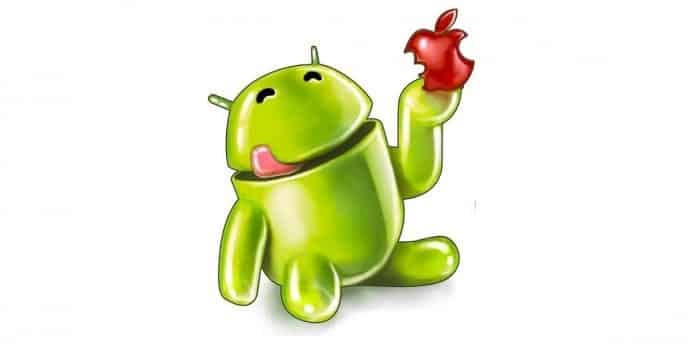 Reasons why Android smartphone users go for iOS and then come back.

iOS vs. Android has always been a burning topic for debates all over the internet. There are numerous users who have changed their Android smartphone with an Apple iPhone and later regretted their decision. In this article I’ll point out the reasons for which Android users switch to iOS and the problems they face after it.

A display having pixels density more than 300 PPI(Pixels Per Inch). Apple used the term “Retina Display” for its such displays. It was said that the visual quality offered by retina display will be beyond amazing. It is true, whether you’re watching a movie, playing a game, reading a document or doing any task with your phone, the display will make working with your Apple device a visual delight.

Yes! This is definitely an attractive “feature” of Apple phones and tabs. When we compare an Android device and an Apple device having similar hardware( RAM size, Processor cores etc), we quickly find out that Apple device performs far much smooth than the Android device. Android users can be seen often complaining about how installing a new game converted their phone into a brick, Apple users seldom face such situation.

The camera of Apple devices is always ahead of the time. That said, an Apple phone or tab having a camera of specific megapixels will always beat the Android phone or tablet having same megapixels. Thanks to the big aperture of the camera lens, decent extra features and better image processing offered by Apple.

This is not it. The list is pretty long but I’ve mentioned the major factors only. Now lets have a look at what actually comes along these features which we get for paying large amount of extra money.

Actually it is expandable on iCloud only. And since Android users get used to having an option of increasing the memory just by buying an SD card, it is not easy for them to handle this surprise. So, they have limited memory, the additional stuff can be put on iCloud, which is a paid service itself.

2.Nothing can be Customized :

Customization is almost nothing in Apple phones when compared with Android ones. Google works extensively on its UI to make it attractive and flexible at the same time. Users can personalize their phones on drag-n-drop basis. Although Android devices too have some restrictions but the extent is very different between these two.

So, if you want the freedom to change things at a level similar to Android, you’ll need to jailbreak your Apple device.

3.The Sliders are Annoying:

And no one knows why Apple never worked on providing affordable phones to its users. And the price always depletes to its half in two years. Most of the iPhone lovers are seen to buy an iPhone just after two or two and a half years after its launch.

Well, these were the points one needs to keep in mind while switching. Above all Apple phones and tabs are amazing in their quality. And Android is affordable yet amazing. We invite your suggestions on the topic. You can give your feedback in the comments below.