Every year we come out with a list of top hacking tools in the year gone past thanks to Concise and this year is not different. Technology and hacking, in particular, is a dynamic field with new innovations and tools being released almost every day. Last year’s list was loved by all our readers and we hope you like the best hacking tools of 2018 list as well.

Every task requires a good set of tools more so with hacking because it is a high precision task. While there are tons of such tools and apps available on the Internet, a security researcher, pentester or a system admin, needs the precise set of tools and apps to find the hidden vulnerabilities. Like every year, Concise Courses conducted an online poll to determine top ten best hacking tools came out with a winner list based on the poll.

Abbreviated as Nmap, the Network Mapper is a versatile must have tool for Network Security, plus it is free and open source.It is largely used by security researchers and network administrators for network discovery and security auditing. System admins use Nmap for network inventory, determining open ports, managing service upgrade schedules, and monitoring host (A term used for “the computer on a network”) or service uptime. The tool uses raw IP packets in many creative ways to determine what hosts are available on the network, what services (application name and version) they offer, which type of protocols are being used for providing the services, what operating system (and OS versions and possible patches) and what type and version of packet filters/ firewalls are being used by the target.

This tool is used for exploiting (utilising network weakness for making a “backdoor”) vulnerabilities (weak points) on Network. This tool comes in both free and paid versions and not open source. The free version is good for normal exploits but deep penetration requires the paid version which gives you a full set of features. The paid version of Metasploit offers such important features that it deserves the price it claims.

John the Ripper is a popular password cracking pentesting tool that is most commonly used to perform dictionary attacks. John the Ripper takes text string samples (from a text file, referred to as a wordlist available here, here, or here, containing popular and complex words found in a dictionary or passwords cracked before, encrypting it in the same way as the password being cracked (including both the encryption algorithm and key), and comparing the output to the encrypted string. This tool can also be used to perform a variety of alterations to dictionary attacks.Including Brute Force and Rainbow attacks.

Concise polls place THC Hydra one place under John The Ripper because of user popularity though it is as popular as John The Ripper. Essentially THC Hydra is a fast and stable Network Login Hacking Tool that will use dictionary or brute-force attacks to try various password and login combinations in the login page. This hacking tool supports a wide set of protocols including Mail (POP3, IMAP, etc.), Databases, LDAP (Lightweight Directory Access Protocol), SMB, VNC, and SSH(Secure Shell used by VPN software).

OWASP Zed makes entry into this year’s top list because of its huge popularity and Zed Attack Proxy (ZAP) is now one of the most popular OWASP projects.  This hacking and pentesting tool with its easy UI finds vulnerabilities in web applications.

ZAP’s popularity is also because it has a large community support and good resources. ZAP provides automated scanners as well as various tools that allow you the cyber pro to discover security vulnerabilities manually. When used as a proxy server it allows the user to manipulate all of the traffic that passes through it, including traffic using https. It can also run in a ‘daemon’ mode which is then controlled via a REST Application programming interface. This cross-platform tool is written in Java and is available in all of the popular operating systems including Microsoft Windows, Linux, and Mac OS X.

Some Kali Linux users may rate Wireshark as the top Wi-Fi pentesting tool though it surprisingly missed making it to last year’s list. Wireshark is the world’s foremost network protocol analyzer. It lets you see what’s happening on your network at a microscopic level. It is the de facto (and often de jure) standard across many industries and educational institutions.Wireshark is one of the best network [protocol]analyzer tools available, if not the best. With Wireshark, you can analyze a network to the greatest detail to see what’s happening. Wireshark can be used for live packet capturing, deep inspection of hundreds of protocols, browse and filter packets and is multi-platform.

The Aircrack suite of Wifi (Wireless) hacking tools are legendary because they are very effective when used in the right hands.This tool also makes it to Concise top 10 for the first time. For those new to this wireless-specific hacking program, Aircrack-ng is an 802.11 WEP and WPA-PSK keys cracking hacking tool that can recover keys when sufficient data packets have been captured (in monitor mode). For those tasked with penetrating and auditing wireless networks Aircrack-ng will become your best friend. It’s useful to know that Aircrack-ng implements standard FMS attacks along with some optimizations like KoreK attacks, as well as the PTW attacks to make their attacks more potent. If you are a mediocre hacker then you’ll be able to crack WEP in a few minutes and you ought to be pretty proficient at being able to crack WPA/ WPA2.

Though it is not a full hacking tool as such Maltego works within a digital forensics sphere and is quite helpful in data breach incident response. Maltego is a platform that was designed to deliver an overall cyber threat picture to the enterprise or local environment in which an organization operates. Maltego makes it to the top list because of its uniqueness in offering network and resource based entities to aggregate information available throughout the web- whether it’s the current configuration of a vulnerable router within a network or the current whereabouts of your staff members on their international visits, Maltego can locate, aggregate and visualize this data!

Cain and Abel has a steep fall from last year’s 3rd place to the 9th place in this years list. This can be attributed to many competitor tools. Cain & Abel is a password recovery tool that is mostly used for Microsoft Operating Systems. This popular hacking tool allows the user to seek the recovery of various kind of passwords by sniffing the network (capturing some of the data packets), cracking encrypted passwords using dictionary, brute-force (generation of hashes out of words and then comparison of encrypted hash with the generated one, this method takes less time than dictionary attack method) and cryptanalysis attacks. Cain, as it is often referred to, can also record VoIP (Voice over IP protocol used for making calls over Internet) conversations, decode hashed scrambled passwords, recover wireless network keys and more. It can crack various types of hashes including NTLM, MD2, MD5, SHA-1, SHA-2 and many more. These functionalities make Cain and Abel one of the best password recovery tool.

This year’s new entry is Nikto website vulnerability scanner at 10th place. Nikto is another classic ‘Hacking Tool’ that a lot of pentesters like to use. Nikto is an Open Source (GPL) web server scanner which performs comprehensive tests against web servers for multiple items, including over 6700 potentially dangerous files/programs, checks for outdated versions of over 1250 servers, and version specific problems on over 270 servers. It also checks for server configuration items such as the presence of multiple index files, HTTP server options, and will attempt to identify installed web servers and software. Scan items and plugins are frequently updated and can be automatically updated.

Nikto is not designed as a stealthy tool. It will test a web server in the quickest time possible and is obvious in log files or to an IPS/IDS. However, there is support for LibWhisker’s anti-IDS methods in case you want to give it a try (or test your IDS system).

If you have any favourite hacking tool of your own which we have not mentioned in the article, kindly mention it in the comments so that we can include it in our next list. 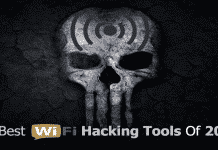 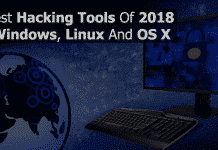