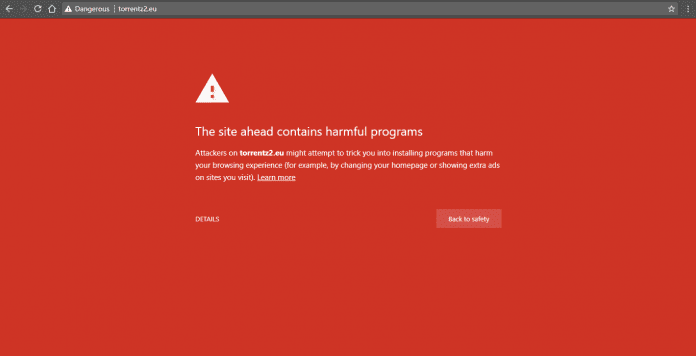 When the users to access Torrentz2.eu, they are greeted with the dreaded red window in Google Chrome with a warning that states, “The site ahead contains harmful programs.” The warning further adds, “Attackers on torrentz2.eu might attempt to trick you into installing programs that harm your browsing experience (for example, by changing your homepage or showing extra ads on sites you visit).”

While those using Mozilla Firefox received a similar warning. It said: “Firefox blocked this page because it might try to trick you into installing programs that harm your browsing experience (for example, by changing your homepage or showing extra ads on sites you visit).”

These warning messages are generated by Google’s Safe Browsing algorithm which highlights websites that could cause potential danger to visitors. Chrome, Firefox, and others use this service to stop users from opening an unwanted software.

These warnings are normally the result of malicious ads, which does not appear to be in this case. The Torrentz2 operator told TorrentFreak that he currently only promotes a VPN service, which is by no means malicious.

However, Torrentz2 has been flagged for installing “unwanted or malicious software on visitors’ computers,” as per Google’s Safe Browsing report.

Torrentz2’s ad warned: “Your Internet Provider is tracking your torrent activity!” which theoretically could fit this category, as ISPs basically don’t keep a record of users’ torrenting habits.

Currently, the torrentz2.eu website is down due to hosting issues, which the operator plans to fix soon.

For those torrent users, who are unaffected by the warning messages by Chrome and Firefox, and wish to visit the affected sites by bypassing the blocks can do so at their risk by taking proper measures (Chrome, FF).