Find out about the benefits and limitations of progressive web apps

Some say that progressive web apps (PWAs) have taken software development to the next level. The reason is that a PWA can work both as a web application and as a native mobile app. To achieve this flexibility, PWA developers address certain requirements for progressiveness, responsiveness, connectivity, user experience, engagement, and installation.

Google, Microsoft, Mozilla, and Apple have all worked to introduce this new standard – web apps that behave like native apps. The benefits are multiple – a progressive web app can be updated directly on the server, there’s no need to submit the updates to different app stores, and one and the same app can run across different platforms and browsers.

A recent report suggests that PWAs often outperform their counterparts. The Pinterest PWA saw a 40 percent increase in time people spent on the website in comparison to the previous mobile version. The ad revenue also spiked by 44 percent. Lancôme also benefited from PWA development – responsiveness time went down 84 percent, which contributed to a 17 percent increase in conversions.

The benefits for users are obvious and easy to see. Flexibility is one of the essentials but it’s not the single most crucial factor.

App stores have strict regulations in terms of when and how new apps and upgrades can be introduced. With PWAs, developers are no longer limited by the rules, restrictions, and conditions that apply to app store products.

PWAs also make it possible to overcome another similar issue developers face – app fatigue on behalf of users. A 2017 comScore document called the 2017 US Mobile App Report suggests that over 50 percent of smartphone users in the US download zero apps per month. We all remember the days when apps were something new and exciting. Phones were filled with screens upon screens of apps (whether these were utilized regularly or not). The 2017 report shows this time is over and the average smartphone user has lost a lot of the interest that previously fueled app exploration.

There are more reasons why companies should consider making the switch to PWAs. Experts from software development company Itransition have listed the most important of them:

However, PWAs also have some downsides. For example, they are not supported by iOS devices. In the picture below, you can see a detailed comparison of PWAs with native and cross-platform apps. 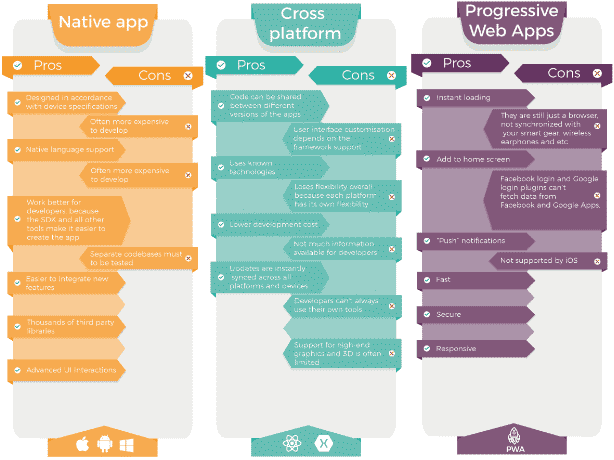 There are still challenges and specifics when it comes to the development of PWAs. Certain criteria have to be met for the app to qualify as progressive.

Google Code Labs provides extensive information and opportunities that could contribute to PWAs having a range of functionality similar to what native apps have to offer.

If you have whatsoever no knowledge in the field and you’re just getting started, the Google Progressive Web App Checklist is going to be a good place to start at. For more technical information, the following Google guide highlights the essentials step by step.

Some bolder predictions suggest that PWAs will replace native apps in the near future. PWAs came into existence in 2015 and their popularity has been growing ever since. The inherent flexibility is one of the features resulting in a high adoption level. As a result, major companies from Twitter to Starbucks have already carried an array of successful PWA experiments. The time may be right for you to make the switch from native and to begin experiencing the inherent benefits progressive web apps.