The challenges of mobile development can causecompatibility testing mistakes. This article outlines some common errors and tips for avoiding them.

If you are in mobile app development, you probably need nobody to tell you how critical each round of testing is to the quality of deliverables. In functional, performance, user-acceptance, and compatibility testing types, each cycle allows you to remove errors and imperfections, taking your app a little closer to the polished endresult that will satisfy the users.

However, app development projects are often fraught with challenges, some of which may jeopardize the quality of testing. Since it belongsat the end of the overall development cycle, compatibility testing is at riskmore than anything: pressures mount and canlead to mistakes in test planning and execution. You will find four of those challenges and mistakes highlighted in this article, along with a few tips to avoid them provided by compatibility testing experts from A1QA. 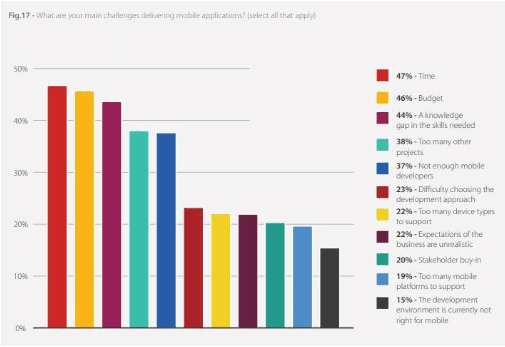 As the graph above illustrates, the pressure to meet development deadlines, stay on budget, and gain access to all the required resourcesis common in mobile app development. Due to this pressure, it can be tempting to leave the compatibilitytesting phase out of the project, particularly when using skilled developers who you know will have compatibility in mind throughout software building.

Unfortunately, no amount of development skill and diligence can guarantee that your app is free from compatibility issues, especially given that operating systems and browsers are frequently updated and new device models are being launched all the time. While compatibility testing is not cheap, and, when executed manually can be time-consuming and resource-intensive, launching your app without this vital QA step is a false economy not to be recommended.

There is only one way to deal with this problem. Whoever is putting the squeeze on the project timeline, budget, or resources must be made aware that there will be no true savings from skipping compatibilitytesting.

As research from Econsultancy revealed in 2017, 40% of companies find their customer experience objectives disrupted by departmental silos, and this internalization of agendas can affect technology departments as much as any other, limiting their ability to communicate and collaborate effectively during projects.

The Mistake: Failing to Discuss Compatibilityduring the Project

This is a likely mistake of larger enterprises with more than one IT team or department. As an example, consider a company in which one IT department is responsible for the development of mobile applications, while another is responsible for building and maintaining backend solutions.

If the silo mindset is in play, the two departments may not collaborate effectively during development projects.Although they will have to play nicely together during integration testing, discussions about mobile and browser compatibility testingmay not take place—at least not until the very end of the project when somebody brings up the issue.

This often results in a hastily launchedcompatibility testing program, initiated without effective preparation. Many bugs come to light that could have been prevented by proper communication, or even worse, those bugs remain undetected due to haphazard test planning.

If you think a lack of departmental collaboration might cause problems for your app development project, consider applying the Scrum methodology. This Agile app development approach involves cross-functional collaboration as part of its makeup, and even requires participants from different functions to cross-train one another. Furthermore, depending on the project type, you can perform some compatibility testing as part of your sprints, sparing you the need to test everything at the end of the development cycle.

There is a difference between having a healthy outlook on mobile app compatibility and being terrified of overlooking even the tiniest imperfection.

The Mistake: Trying to Test for 100% Compatibility

To put it simply, if you try to test your app for every outlying OS version or outdated device, you’re looking at a very long and expensive compatibilitytesting phase. A certain amount of test prioritization is essential if you ever want to launch your app.

According to a study by market research firm Opinion Matters, nearly all companies involved in application development are dealing with backlogs, and 50% are trying to clear backlogs of ten or more apps.

It’s not surprising then that the pressure to launch apps faster can prompt efforts to shorten their development cycles.When that happens, test plans can sometimes become the first casualties of such expediency. It might be that the number of tests is drastically reduced, or in some cases, companies forego the use of software test specialists and instead leave testing in developers’ hands.

The Mistake: Skimping on Testing or Test Resources

While not as bad as ignoring compatibility testing altogether, paring a test cycle down is a risky measure. It’s one thing to consciously exclude certain tests, like those involving older devices and OS versions, and quite another to cut tests on configurations that are widespread among your userbase. Similarly, neither the quality of your app nor the length of your development cycle is likely to benefit from burdening developers with testing.

Challenges are Inevitable, Mistakes are Avoidable

Shortages of time, money, or resources, the pressure to move quickly, fear of imperfection, and departmental silos are all the challenges faced by a great number of mobile app development companies. They affect development and are often unavoidable, so they must be met head-on to avoid making critical mistakes outlined in this article.

The most important thing to remember is to be aware that the challenges exist and will probably manifest at some point in your projects. With that knowledge, you can prepare and plan for them, improving the likelihood of a reliable, effective, and ultimately successful mobile compatibility test program.