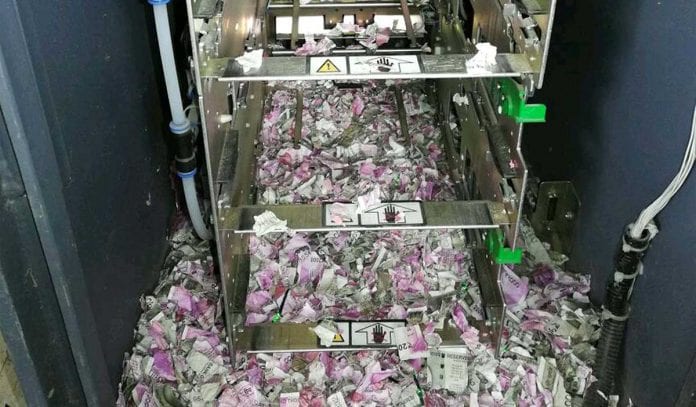 Rat dies after eating a meal worth more than $19,000 inside an Indian ATM

When bank technicians were called to find out why an automated teller machine (ATM) of State Bank of India’s Tinsukia location in Assam, India had not been working for days, they hardly expected that the reason behind the non-working of the ATM was a hungry rodent.

Apparently, a rodent was able to find its way inside the ATM at the State Bank of India’s Tinsukia location, who chewed up bank notes worth more than $19,000 and then died.

The ATM had been broken since May 20, officials said. When the technicians came to fix the ATM machine on June 11, they were surprised to find out that all of the notes in 500-rupee and 2,000-rupee denominations inside the machine were shredded. They also found a dead rat inside it.

Police superintendent Mugdhajyoti Mahanta on Friday said that the rat had entered in the back of an ATM through a small hole for cables.

“The bank officials came to check the ATM machine last week and found a dead rat and shredded banknotes when it was opened,” said Mahanta.

“We’ve checked and there is no other criminal or conspiracy angle to the incident. It looks like the rats entered the machine through a small opening for some wires,” he added.

According to State Bank of India officials, the rat somehow managed to evade the ATM’s security cameras installed for enhanced security while sneaking inside.

Once the rat was inside the machine, it apparently started feasting on the bank notes until it couldn’t anymore. It appears that the rat died from eating too much money.

“The ATM was out of order for a few days and when our technicians opened the kiosk we were shocked to find shredded notes and a dead rat,” said Chandan Sharma, SBI branch manager in the town of Tinsukia in the northeastern state of Assam.

“We have started an investigation into this rare incident and will take measures to prevent a recurrence.”

Chief General Manager of North-eastern circle of SBI, Sunil Kumar Tandon said, “We will think in terms of pest control and ways to deal with such kind of rodent menace.”

The ATM in Tinsukia had $42,685 worth of currency inside the kiosk, of which $25,022 were recovered intact by the bank technicians. SBI is India’s largest bank with more than 50,000 ATMs spread across the country.