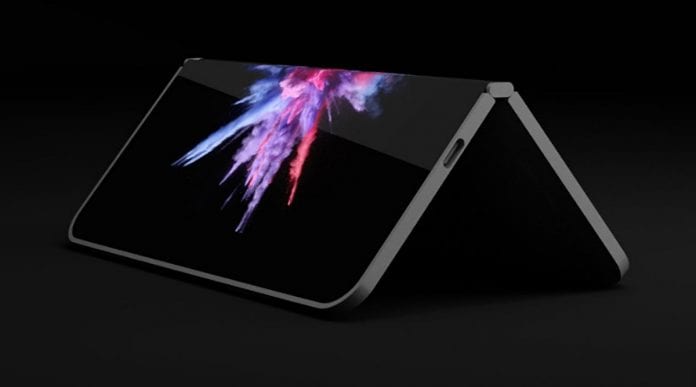 Recently, Microsoft’s Corporate Vice President of Devices and one of the heads behind Surface products, Panos Panay had taken to Twitter to tease the picture of two wooden photo frames adjoined by a hinge, hinting at the envisioned foldable Surface Phone Andromeda device that the tech giant is probably working on.

While patent images, unofficial renders, and useful concepts for Microsoft’s Andromeda device have been doing the rounds for quite some time now, The Verge has now stumbled upon leaked documents that show how the dual-screen gadget could approach both gaming and productivity chores.

As per The Verge, correspondence within Microsoft describes the product as the first in a “new and disruptive” category of devices set to bridge the gap between PCs and phones. The documentation also apparently references a “device form factor that brings together innovative new hardware and software experiences to create a truly personal and versatile computing experience.”

Last December, David Breyer (@D_Breyer), a graphic designer, had posted the first set of renders, saying they were based on the latest patent filings. Now, according to The Verge, the current prototype of the pocketable Surface look is not just close but identical to the 3D concept created by David.

However, this time around, the graphic designer has shared a new series of images of the dual-display device that is based on two modes. It highlights the device’s potential for both works and for play, which David refers to as laptop mode and gaming mode respectively.

As per the new batch of renders, the dual-screen device is shown as a mobile gaming gadget, where the first screen acts as a display for the video game, while the bottom screen turns into a virtual Xbox One controller, complete with the Xbox logo, two virtual analog controls, a D-pad, and of course the A, B, X, and Y buttons.

Further, the two other renders show the device in laptop mode with a virtual keyboard on the bottom half instead of a game controller. Furthermore, one part of the screen displays Microsoft Word. Additionally, there’s also a stylus placed nearby.

While the concept images certainly look quite interesting but with no official confirmation coming from Microsoft on this, we will have to wait and watch to see what the final product turns out to be.