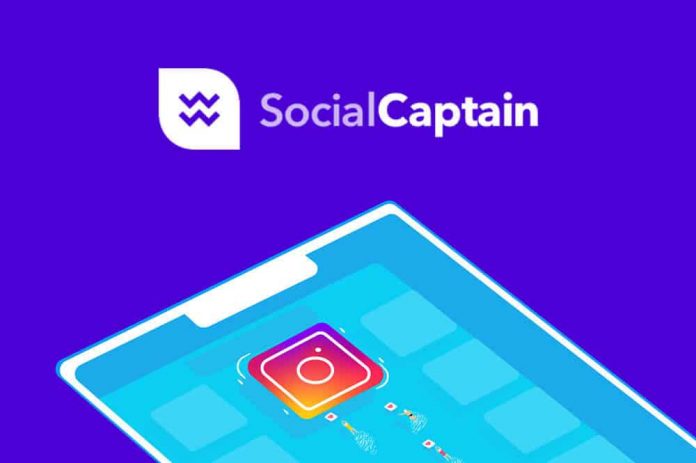 One of the most common questions I get is this: “Is there an easier way to get noticed on Instagram?”

I understand the sentiment behind this question very well. Whenever you try to establish yourself on a platform, especially one as big as Instagram, you’re often left feeling like a small boat in a hopelessly vast ocean. It leaves you asking yourself if there’s a simpler approach to it all that you just don’t know about yet.

For all those still stranded at sea, I have an answer for you: Yes, there is an easier way.

I’ve tried a lot of different tools over the years, and I have to say that automation is the best method to get your audience’s attention. However, there’s a surplus of automation services out there. Too many to count anymore, really. So it can get pretty confusing telling which ones are actually well-made and which ones are total junk.

Recently I’ve come across one called SocialCaptain, and I decided it was worth trying out.

How does it work?

If you’ve ever found managing a social media account to be a tiresome pain, then automation is exactly what you’re looking for. It’s essentially a tool that connects to your account and makes it run itself.

SocialCaptain is an automation tool specifically for Instagram. It can be set to follow other users, like posts, and leave comments. This takes care of the most tedious but essential part of social media: networking. Through interacting with users that match your demographic requirements, SocialCaptain builds your follower count while you’re away.

What features are included with it?

SocialCaptain comes with many different features, although some can only be found with certain plans. Any differences will be noted in the sections below.

Each feature is designed to provide more depth and personalization to your automation strategy. Here are some of the most notable ones that come with it:

No matter how shiny the exterior is, any good piece of technology is always defined by what’s under the hood. SocialCaptain most certainly has a strong engine in that case. Their automation systems are powered by artificial intelligence modules that keep your account running at a safe and constant pace.

When you sign up for a Turbo account, the automation gets further enhanced with the SmarthGrowth feature. This component optimizes your performance by learning from past engagements and figuring out what works the best for your brand.

SocialCaptain gives you many different ways to define your target audience. These options assist their systems in finding the most receptive and relevant users. The more that you adjust these settings, the better it will be able to cover your exact niche.

For instance, you can request that it only engages with users of a certain gender. You could also specify for it focus on users found under certain hashtags or accounts that they follow.

If you’re anything like me, you want immediate and tangible proof that everything is functioning as it should. The good news is that SocialCaptain’s dashboard is tailored for just that. You can check it at any point to see the latest updates on your Instagram’s growth.

A lot of services are oddly impersonal about how they conduct their customer support. Some have a ticket-based system where it might take several days to get a response. Then there are others that have automated it entirely, with generic chat bots that handle your queries.

SocialCaptain, on the other hand, prefers to do it the old-school way. They have a support team made up of real, trained people that you can talk to live anytime you need them. Also, if you’re a Turbo member, you get your own dedicated support crew.

Not at all, surprisingly. SocialCaptain is quite affordable compared to other automation services. I’ve seen some that are double or sometimes even triple its price, and yet don’t surpass it in quality or amount of features.

For $15 dollars per week, you can go with the 7 Day plan. That comes with the basic array of features: automation, analytics, targeting, unlimited actions, and more. Alternatively, there’s also a 30 Day plan for $39 per month, which will get you the same thing at a reduced long-term price.

Finally, there’s the Turbo plan for $99 per month. It’s essentially the premium version of SocialCaptain. The extra amount gets you all of the same features as the other plans plus 10x faster speed, exclusive support access, and the SmartGrowth boosting module.

How secure is it?

It takes a lot of trust to hand over your social media account to somebody else and hope for the best. This is especially true with all the headlines we’ve been seeing about security breaches and companies selling information to third parties without consent.

With that in mind, I put SocialCaptain under the highest scrutiny in regards to its safety measures. I can say with confidence—after the time I’ve spent testing it out—that it proved itself to be trustworthy.

Right off the bat you can tell that SocialCaptain takes its security seriously. It has an entire page dedicated to the various precautions it takes to shield your information from prying, unauthorized third parties. Not even their own staff and engineers can obtain your data without your express permission.

During my time with SocialCaptain, I didn’t notice anything questionable happen to my account. Nothing on my Instagram was altered, nor was it used in any way outside of what was promised upfront. So I can testify with certainty that SocialCaptain is a professional service that sticks to its word.

Is it difficult to use?

There always seems to be a learning curve whenever you adopt a new tool for your operations. That alone could discourage someone from picking it up, as it can take up time that they just don’t have.

If that’s a nagging concern that’s holding you back, then it shouldn’t be; SocialCaptain is about as simple as it gets. You learn just about everything you need to know within minutes of setting it up and going through the brief tutorial.

In fact, I rarely even did much other than occasionally visiting my dashboard to view my live analytics and change a few of the filters. Otherwise, SocialCaptain ran perfectly well without needing much input from me.

To answer this question properly, I decided to try out SocialCaptain for a full month. I also connected it to two different Instagram accounts that I helped run. The first one only had around 2,000 followers at the start, while the other was considerably larger and had about 80,000 followers.

The smaller account had just above 3,900 followers at the end of the month. Meanwhile, the larger account almost reached 150,000 followers. The growth was impressively consistent with what was promised.

These numbers made me wary at first, though. After all, they could’ve easily been padded with fake bot accounts. There’s a lot of services that aren’t above underhanded tricks like that. Yet, after having the accounts thoroughly checked by multiple sources, it was concluded that their followings were mostly made up of real users.

So yes, not only is SocialCaptain effective, but it also works for accounts of all sizes.

Should I get it?

I’ll cut straight to the point: if you’re looking for an Instagram automation service, then you won’t be disappointed with SocialCaptain. It will turn Instagram’s treacherous waters into smooth sailing.

It’s composed of a strong lineup of features, isn’t overpriced, has some of the best security around, doesn’t require much effort, and always strives to bring you more real followers each day. As a whole, it covers all of the bases you’d want an automation tool to encompass.

SocialCaptain gets a big thumbs up from me. After all of the growth I’ve seen in just four weeks, I can’t wait to see what several more will bring.