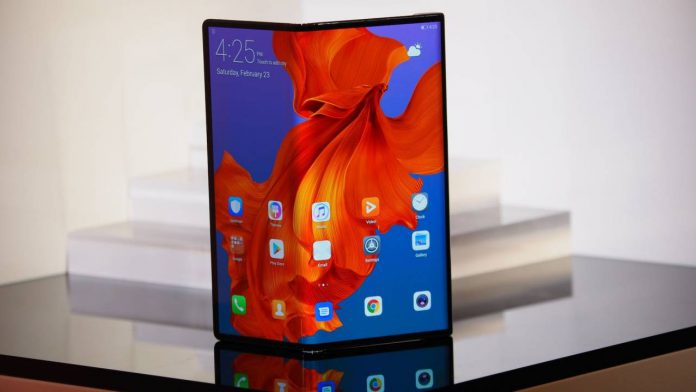 At the Mobile World Congress on Sunday, Huawei revealed the latest phone added to their lineup, the Mate X. Announced just four days after competitor Samsung revealed the Galaxy Fold, the Mate X is another foldable smartphone meant to compete in one of the newest — and more experimental — categories in the mobile device industry.

However, unlike prototypes from other phone manufacturers, Huawei’s Mate X reveal was met with a lot of praise with some calling it the “best first draft for a foldable phone” available. Writing for The Verge, Vlad Savov got a chance to see Huawei’s newest device up close and personal and was impressed by the overall look and feel, stating that:

“As of today, I think the foldable [phone] that comes closest to the goal of resetting our expectations and use of mobile technology is the €2,299 ($2,600) Huawei Mate X. This is the most refined design, the slickest and thinnest form factor, and the most sensible use of space that any manufacturer has yet shown.”

What Makes This Phone Different?

Huawei’s latest prototype is far ahead of the competition when it comes to foldable devices. As companies continue to push the envelope in an attempt to redefine the mobile computing experience, it’s clear that some ideas are working while others simply aren’t. There’s a lot that goes on behind the scenes when developing a new product, especially for products as complex as industry-leading smartphones. The ideation process behind these cutting edge devices is top notch and involves some of the best idea management in the industry to come up with innovative and efficient approaches at phone design.

While the Mate X is still a prototype, there are some distinct features setting the phone apart from the competition thus far in the foldable category. Like other foldable designs, the Mate X functions like a normal smartphone operating at roughly the same size consumers expect from a flagship device but then can be unfolded to function more like a tablet with a larger screen. One of the key differences, however, is that the phone’s screen is on the outside rather than the interior.

The Mate X takes advantage of a foldable wraparound OLED plastic screen rather than glass like most average smartphones on the market today. When folded up, the device boasts a 6.6 inch display size on the front, a 6.38 inch rear display, and an impressive 8 inch display upon opening it into tablet-like mode. This makes the Mate X larger than the Galaxy Fold which offers only a 4.6 inch screen size when folded, opening up to a total of 7.3 inches. Beyond a myriad of other specs, the Mate X also packs a larger battery at 4,500mAh vs Samsung’s 4,380mAh Galaxy Fold. And all of that’s not to mention that the Mate X is fully ready for 5G right out of the box as well. However, specs sheets are just that: specs. Overall, what makes or breaks a phone can often come down to how a phone feels in a consumer’s hands.

For those who had the opportunity to get a hands-on look at the new device, the feel is one of the areas it shined the most. From what reviewers like Savov have observed from their (albeit limited) time with the Mate X, there’s no noticeable crease in the middle of the screen when unfolded. Richard Yu, Consumer CEO of Huawei, emphasized during the demonstration that the device is completely flat when opened with no gap between the screens thanks to an “innovative and complex hinge.” Between the lack of a spine in the center of the screen and an overall feeling that’s more clever and less clunky than its predecessors, the Mate X is less like a weird prototype device and more like a consumer-ready product.

Among all the excitement, it’s important to note that the Mate X is still at its earliest stages and is really for early-adopters in the foldable market when it ships mid 2019. Though smartphones are already pricey, the Mate X has a price tag that’s prohibitively expensive for many consumers at a whopping $2,600. And yet, the ideation, innovation, and implementation from Huawei displayed in the Mate X is a promising sneak peek into the future of the foldable industry.