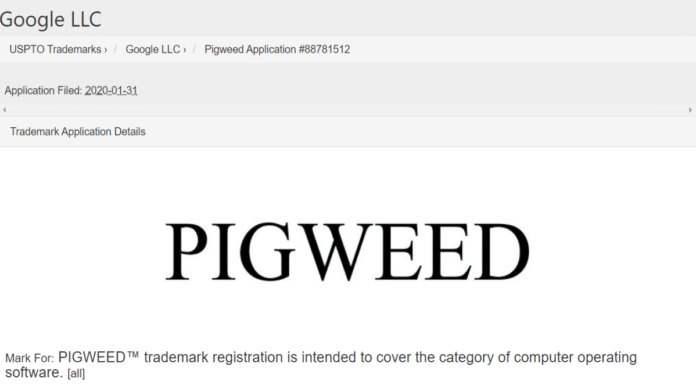 It is a known secret that Google is quietly working on Android’s successor called “Fuchsia OS” for quite some time now.

It now appears that the search giant has filed a trademark called ‘Pigweed’, which is likely a new operating system that the company is working on.

Spotted by Reddit user Igats, the document filing was submitted by Google at the United States Patent and Trademark Office (USPTO) on January 31.

The new trademark application has been filed under the name “Pigweed”, which according to Google will cover “computer operating software”.

So, what is Pigweed?

It is a plant in the amaranth family that grows along the ground surface with stems rising at the tips. These plants are actually edible and quite nutritious. Some of these pigweeds when fully grown, dry out and form tumbleweed, spreading their seeds when the wind blows.

Last November, the folks at the publication website 9To5Google found that Pigweed had a reference in the Fuschia OS source code, which was subsequently to “fuchsia” from “pigweed”.

In another instance, the website had spotted the name “Pigweed” in Google’s Chromium code repository.

This shows that Pigweed has its own separate instances of the Monorail bug tracker and Gerrit code review.

Besides the name, currently, there is very little information about “Pigweed”. We will update this space with more details as and when we learn about Pigweed.