It seems that the entry-level models, iPhone 14 and iPhone 14 Plus didn’t really impress Steve Jobs’ Daughter.

Eve Jobs, daughter of Steve and Laurene Powell Jobs reacted to the launch of the iPhone 14 by sharing a popular meme. 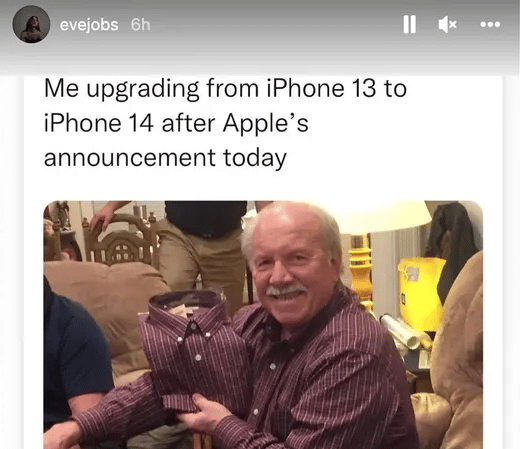 Eve clearly thinks that people upgrading from iPhone 13 to iPhone 14 are getting no major upgrades. And she’s absolutely correct.

In addition to having exact same design ergonomics, the iPhone 14 also features almost similar display size, refresh rate, storage, and cameras as the ones found on iPhone 13.

You will be surprised to know that for the first time ever, iPhone 14 will be the first brand new iPhone to be powered by the exact same CPU that powered its predecessor.

Apart from Eve Jobs, Millions of Twitter users were also not happy with the new iPhone 14. Here are some of the best memes,

Ctto for the meme lol pic.twitter.com/dpFxioe0n5

iPhone 14 is overgrown with new memes after the announcement https://t.co/ZFr3auPs2R pic.twitter.com/T7SVxJJn0m