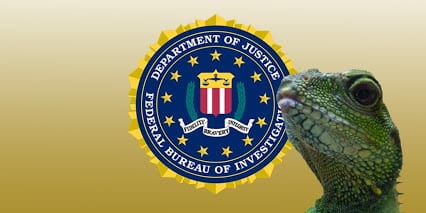 This crew is taking credit for the Sony and Xbox hack and the Feds are already taking the low-hanging fruit. It is not really a surprise that these hacks are so prolific most hacker crews want to get their name out there but to do so means, well that it is out there.

Colour me surprised that a member of the Lizard Squad hacking group, whos handle alias is “ryanc” aka Ryan caught the attention of the FBI aka Federal Bureau of Investigation after speaking with the media about the Christmas-day attacks on Xbox Live and the PlayStation Network (PSN).

Sources are sketchy and unconfirmed but “Ryan” is said to be a 16 possibly 17 year old that lives in Finland. Because of this any likelihood of extradition is improbable so for now he is just out of reach from the U.S. federal authorities, but not necessarily out of trouble.

Ryan’s bold maneuver to claim responsibility for the hack on the media may seem foolhardy he claims that he is protected by the International Covenant on Civil and Political Rights, a 1966 treaty adopted by the United Nations General Assembly that emboldens certain civil rights for citizens of signatory countries.

It is know that the U.S., ratified this treaty in 1992, and with the current climate of legal loose ends and disregard of its own legal procedure the U.S. may not necessarily view the Covenant as legally binding making this unclear how the treaty would factor into any legal action against Ryan.

Of course, Finnish law enforcement authorities may still pursue legal action against Ryan for Lizard Squad’s attacks but the local Finnish Police are silent on their intent.

If notoriety is what Ryan wanted he certainly has it after spending three months in a maximum security prison in Finland earlier this year, when he allegedly made a bomb threat to American Airlines. It was reported that the President of Sony Online Entertainment John Smedley was aboard the flight threatened by Ryan through Lizard Squad’s Twitter account.

Ryan is no stranger to the FBI. In 2013, Ryan claimed he and a friend ordered hot wings and pizza using stolen credit cards while in Las Vegas at the Rio hotel, when they were attending the annual Defcon hacker conference. Reportedly after placing their order, six armed law enforcement officers and two FBI agents raided the hotel room.

Ryan claims the FBI raided the hotel room because they suspected him to be behind “thousands of hacks.” Ryan claims he was never actually detained, so it is unclear of the legitimacy of this but a source claims Ryan posted bond and fled home to Finland.

Of course the details are not clear.

The details of the hack attack…

The crux of the hack involved a common hacking attack known as “distributed denial of service,” or DDoS, in an attempt to shut down Xbox Live and PSN.

The DDoS floods was a network attack that flooded their networks with more traffic than it could handle, essentially rendering it inaccessible to legitimate users of the system. The 24 hour take down on Dec 25th 2014, which at best inconvenienced Xbox and Playstation console players was a unsophisticated attack and was unlikely to of obtained any personal details, passwords or credit card data.

The actual attacks were perpetuated by 3-4 people, the youngest being 13 which goes to show that even the smallest crew can have a big impact on the hacking scene.

Well, it could have been worse a DDoS attack can be triggered by a common piece of software call a low orbit ion cannon. While not the most sophisticated hack (like the one that directly breached Sony and obtained employee files, social security numbers, medical records and films), it was a wake up call to Sony that even the smallest person can cast a rather large shadow.