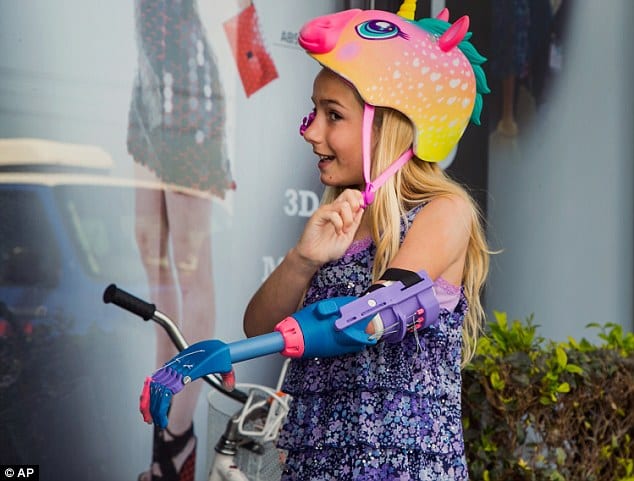 Seven year old Faith Lennox got a custom made lightweight prosthetic hand that was created by using a 3D printer technology for $50.

Faith Lennox, suffered “compartment syndrome”, this is a condition in which the position of the fetus while birth leads to an irreparable damage to any part of the body and in her case the left arm of Lennox was damaged severely and doctors had to amputate the area below her elbow when she was 9 months old. Lennox did not want a prosthetic limb  however she seems to have changed her perspective about wearing the prosthetic limb as she was given an opportunity to choose the design and colors for her custom made prosthetic created by Build It Workplace using 3D printer technology.

Also the prosthetic is lightweight and is available for a price of mere $50. The new ‘Robohand’ has a mixture of Lennox’s favorite colors pink, blue and purple and the little girl is truly excited to have this prosthetic limb as she was seen pedaling her cycle with ease wearing the Robohand that was rolled off the 3D printer.

As per ABC report, Faith’s mother Nicole Lennox said: “The 3D hand has made it easier for her to balance. She can distribute her weight more evenly without having to lean so far when attempting to steer with just one hand.” 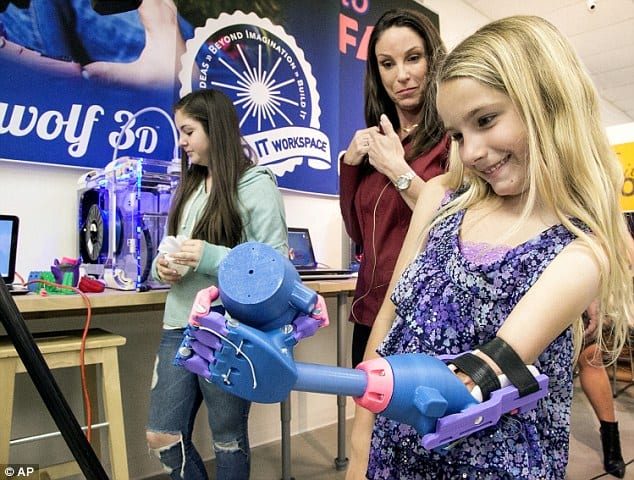 Mark Lengsfeld, a member of the non-profit E-Nable group helped the family to get the prosthetic. He said, “E-Nable provides open-source technology for building the hand, making it economical for anyone with the right printer and a set of instructions to create one. Faith’s only costs $50, and when she outgrows it, she can easily build a bigger replacement.”

The greatest advantage of the Robohand is that it can be reproduced and it inexpensive because it does not use any expensive sensors. Its just less than a year that Mark Lengsfeld, a mechanical engineer by profession founded Build It Workspace company that created the Robohand. Lengsfeld told AP reporters that his company has used the 3D printer technology “to create a lot of products right from pumps for oil and gas companies to parts for unmanned aerial vehicles, but this was the first time his company worked with prosthetics.” It seems he was actually worried however seems it has turned out to be pretty successful.

For designing the prosthetic, Lengsfeld took the assistance of Mark Muller who is a prosthetics professor at California State University. As per Muller, an adult prosthetic is usually accompanied with sensors that are connected to the muscles of the person and not only these are heavier but also they are costlier ranging anywhere between  $15,000 to $20,000. Hence, in comparison the 3D designed prosthetics low in weight and also much more affordable as the kids would outgrow the devices within a matter of six months to one year.

In the recent times 3D printer technology has actually gained wide popularity because the technology uses lightweight materials and overall cost of the end product is much low and it helps to design custom made products.