Disney Research has demonstrated an LED-to-LED “Linux Light Bulb” networking technology that would let bulbs and toys communicate with each other, thereby bringing us one step closer to the reality of Disney/Pixar’s Toy Story.

The working idea behind this innovation was developed by Disney in collaboration with a Swiss University,ETH(located at Zurich).The system uses a linux coded chip embedded into LED to make it suitable for communicating with devices holding similar capabilities.Suitable candidates may be toys, wearables, phones, computers, cars, and other Internet of Things gizmos.

This system uses VLC (Visible Light Communication) technology, which is highly emerging today and has been in a stage of evolution from recent years. The technology uses the ability of modern LEDs to interact with digital systems to quickly change brightness and frequency of light. LEDs can also act like photo-diodes (A photo-diode is p-n junction diode which gets activated when light of visible range falls on it). While the modulation caused by these process in LED will be what human eye sensitivity can detect, so user will not feel any flickering of lights or other safety concerns, according to Disney.

The project’s main contribution the VLC field is the addition of networking technology. Disney Research has developed a smart bulb prototype and has defined a VLC networking framework for it based on Internet Protocol (IP) communications.

Networked VLC technology would be much cheaper than embedding toys and other low-cost gizmos with WiFi, Bluetooth, ZigBee, or other short-range wireless technologies. By implementing the Linux Light Bulb chip, the LEDs embedded in many modern toys would become precisely controlled smart lights. The lights could be linked in a mesh network in order to coordinate device activities and establish communications even without direct line of sight. 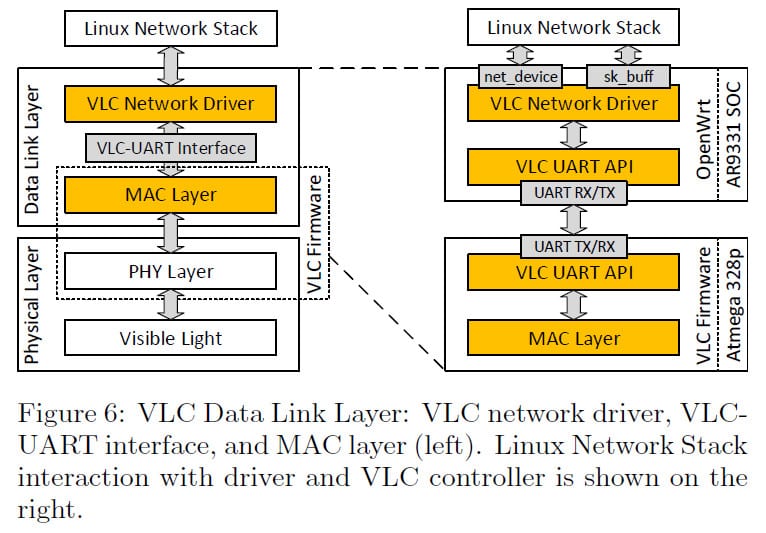 The paper describes a VLC link layer for Linux that uses a new VLC network driver module. The module sits on top of VLC Medium Access Control (MAC) and Physical (PHY) layers, which were previously developed by Disney Research. The network driver interfaces between IP protocols and the VLC layers.

Disney’s hardware test bed is built around a module that runs the lightweight, networking savvy OpenWRT Linux on a MIPS-based Qualcomm Atheros AR9331 SoC. This same combo has found its way into many low-end IoT devices, wireless-enabled computer-on-modules, and simple hacker SBCs, such as the Arduino Yún.

On the Linux side, the VLC controller is abstracted as a standard Ethernet interface, implemented as a kernel driver module. This is said to enable communications using the Internet Control Messaging Protocol (ICMP), the User Datagram Protocol (UDP), and the Transmission Control Protocol (TCP). 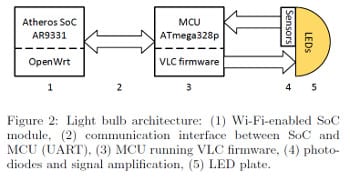 The Atheros-enabled controller module communicates with a separate VLC firmware module, which in the test bed is implemented on Arduino Uno boards with ATmega328p MCUs. The Linux controller module communicates with the Arduino-based firmware module using a serial interface. The Arduino module then directly drives the LED and sensors. The connected LED lightbulb is modified with the addition of four photodiode sensors, as well as a heatsink and power supply to support the intensive light communications. 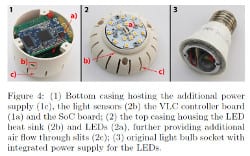 The above images show the insights of the Linux Light Bulb.

Disney Research said it considered skipping the separate Arduino-based module by controlling the bulbs directly from the Linux module using GPIO connections. However, this would essentially preclude the Linux module from doing any other work, an added value “which motivated the addition of an operating system to VLC,” says the paper. The separate VLC firmware design is said to ensure real-time critical performance while freeing up the Atheros module for other duties.

The Atheros chips in the Linux Light Bulbs have built-in WiFi, which Disney Research used for testing purposes. Yet, the lights are intended to communicate with each other only using VLC, notes the Disney paper. Presumably, the mesh networking capability would support a design in which only one endpoint in a network would require wireless, which might well be a smartphone already equipped with it.

With a maximum payload of only 200 bytes per transmission, resulting in a maximum of 1Kbps bandwidth, Disney’s VLC technology is not going to to be used for streaming media, but only for sending and receiving simple commands. Yet, much more sophisticated VLC systems have demonstrated point-to-point communications at speeds of up to 800Mbps, albeit without any networking smarts. Disney’s proposed, low-cost platform will likely be able to ramp up to more useful dial-up level Kbps bandwidths, although it’s unclear if it could achieve even single-digit Mbps speeds anytime soon.

By adding networking to VLC, Disney has apparently overcome the technology’s major limitations of range and signal interference. Advantages over wireless communications not only include lower cost and power consumption, but also better security.

Disney Research envisions the technology as extending beyond the next generation of Disney toys to other low-bandwidth IoT applications. The paper notes potential VLC-based localization services using existing lighting infrastructure, as well as controllable LED lighting, identification, and indoor tracking.

A wider role for light communications may await future processors that incorporate so-called III-V materials. Such optical-friendly chips should be able to enable high-speed optical communications not only within computers, but between devices as well.