Torrents of screeners of The Hateful Eight, The Revenant, Creed, Steve Jobs and Joy leaked by pirates

Pirates have leaked high quality copies of some of the year’s most anticipated movies on to torrent websites. The high quality screeners of The Hateful Eight, The Revenant, Creed, Steve Jobs and Joy are making rounds.

Three of the movies have been released well before their theatrical release. And torrent lovers are in for a special new year with one prominent piracy group now promising to leak dozens more in the days to come.

Here is a complete list of the screener leaks : 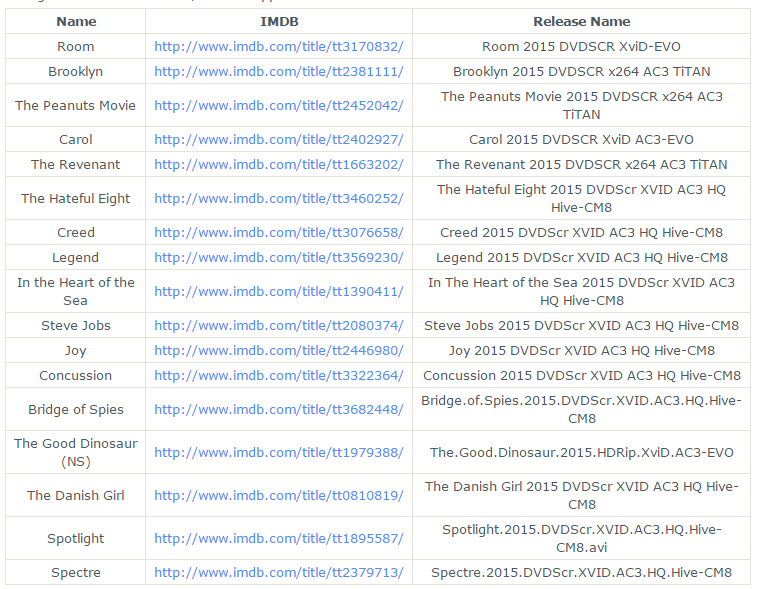 2015 has been a exceptional year for the screener leakers with Hollywood blockbusters like Straight Outta Compton, Brooklyn, Room, The Peanuts Movie and Carol all leaking during recent days. However the Christmas holidays are turning out to be a bonanza for the torrent lovers.

Sly Stallone may be not happy with the fact that his Creed is doing exceptionally well on the torrent circuit with 100,000 downloads so far. Quentin Tarantino may be more than angry because his latest movie ‘The Hateful Eight’ has been the top torrent download this week. Before Sunday had even drawn to a close the movie had been downloaded more than 100,000 times but at the time of writing those numbers have swelled to more like 220,000.

However, nothing beats a Leonardo DiCaprio starrer. Alejandro G. Iñárritu’s ‘The Revenant’ starring Leonardo is the undisputed number one download this week end. The Revenant is slated for a Christmas day release, by Sunday this tale of vengeance had clocked up in excess of 180,000 downloads. Today those totals have reached an ‘impressive’ 300,000.

Joy, which is slated to be released today is also in the list of top torrent downloads. Joy is a biographical comedy-drama film written and directed by David O. Russell and starring Jennifer Lawrence as Joy Mangano, a self-made millionaire who created her own business empire.

The leaks have been noticed by Hollywood and they are working double time to get these screeners removed from the torrent websites. The FBI is trying to catch the source of the leaks and has already traced The Hateful Eight screener back to a Hollywood executive. In the meantime, several Hollywood studios have gone into damage control mode.

The Weinstein Company sent Google its first batch of DMCA notices in nearly a year, asking the search engine to remove 1,067 links across 189 different domains. File-hosting services Rapidgator and Uploaded were the top targets, with more than 100 links each.

Entertainment Film Distributors is also protecting its stake in The Hateful Eight, with varying success.