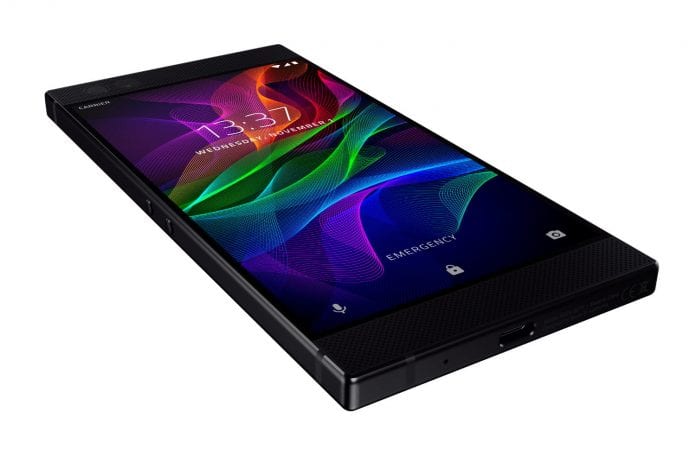 Razer Inc., a company known for making high-powered gaming laptops and peripherals, on Wednesday announced its first ever smartphone, the Razer Phone, aimed to target gaming enthusiasts. With its mind blowing specifications, this smartphone could easily give tough competition to the likes of Apple’s iPhone X, Samsung’s Galaxy devices, Google’s Pixel 2, and other top smartphones in terms of performance.

“It’s common knowledge that I’m obsessed with my smartphones, I play a ton of games on them, and they’re my go-to for streaming content,” said Razer Co-Founder and CEO Min-Liang Tan. “We have wanted to make a phone with gaming-level tech for years, and the Razer Phone delivers in every way we imagined.”

Earlier this year, Razer had acquired smartphone maker Nextbit, so it is not a huge surprise that the Razer Phone looks a lot like the Nextbit Robin. Made of black CNC aluminium, the Razer Phone has a 5.72-inch ICZO LCD UltraMotion display and comes with the 2,560 x 1,440 resolution, a refresh rate of 120Hz, a Wide Colour Gamut (WCG) and Corning Gorilla Glass 3 on top. There is a big bezel on the top and bottom of the smartphone with two front-firing Dolby ATMOS built-in speakers on either sides. It is powered by the Qualcomm Snapdragon 835 processor paired with 8GB of RAM and 64GB of internal storage, which is expandable up to 2TB via microSD card. The Razer phone comes packed with a 4,000mAh battery into the Razer Phone, and is the first phone to support Qualcomm’s QuickCharge 4.0+ charging standard. This means it can charge from zero to fifty percent battery in fifteen minutes.

The smartphone has dual 12-megapixel rear cameras on the back, which is accompanied by LED flash. The standard 12-megapixel camera has a f/1.7 aperture while the zoom lens has a f/2.6 aperture and both lenses support phase detection autofocus. The front-facing camera is a 8-megapixel shooter that has an aperture of f/2.0, and there’s no front-facing flash. It has no headphone jack but there’s a THX-certified adapter for the USB-C port, which will convert to 24-bit digital sound. Razer will run Android 7.1.1 (Nougat) out of the box, which will be updated to Android 8.0 (Oreo) sometime in the next few weeks. On the connectivity front, the Razer Phone includes Wi-Fi 802.11 a/b/g/n/ac, Bluetooth 4.2, NFC, 4G, and 3G. It measures 158.5×77.7x8mm and weighs 197 grams. The phone is complete with the company’s tri-snake logo stamped prominently on the back.