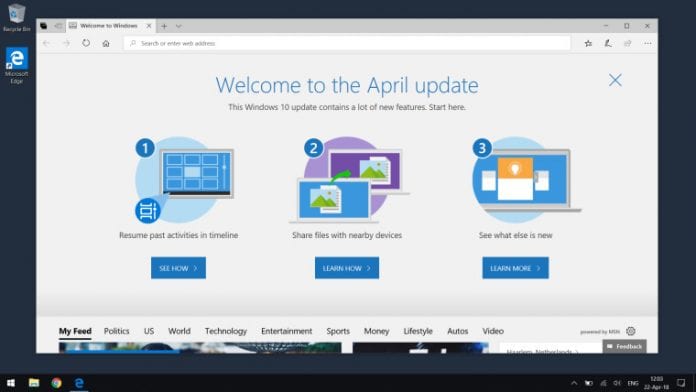 ‘Windows 10 April Update’ could be the name of next update

If one has to go by an official page in Microsoft Edge, then the upcoming Windows 10 Spring Creators Update will probably be called the ‘Windows 10 April Update’. Just last week, a Microsoft video had emerged that made reference to Windows 10 April 2018 Update.

In a server-side update to the Microsoft Edge browser (first noticed by Windows Latest), the company has pushed a new RTM (Release To Manufacturing) build 17134.1 to all rings of the Windows Insider program. The new welcome page reads: “Welcome to the April update. This Windows 10 update contains a lot of new features. Start here,” which suggests that the “Windows 10 April Update” could be the name of the next update. The welcome page also makes references to the timeline features and sharing options. You can find the welcome page here.

While Microsoft hasn’t officially released any name for the final version of the upcoming update, it would be interesting to see if the Redmond giant goes with the April Update name considering that it will be released this month. We will have to wait and watch!