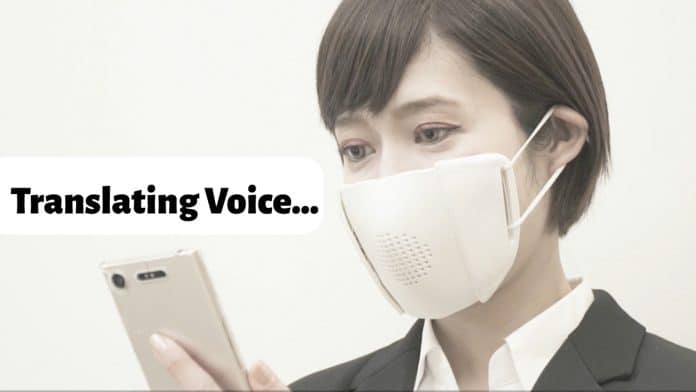 With the use of face masks becoming mandatory amid the COVID-19 pandemic, a Japanese robotic startup has invented a “smart face mask” that not only protects from the spread of coronavirus but also makes communication easier.

Developed by Donut Robotics, the “C-Face” smart mask is made of white plastic and silicone, which fits on top of standard face masks. It connects via Bluetooth to your smartphone or tablet via a dedicated app, which then translates speech into text messages, makes calls, or amplify the mask wearer’s voice.

The mask also includes a built-in microphone to create recordings of business meetings, which will be then stored on the connected smartphone.

“We worked hard for years to develop a robot and we have used that technology to create a product that responds to how the coronavirus has reshaped society,” Taisuke Ono, the Chief Executive of Donut Robotics said in a Reuters report.

The major highlight of C-Face smart mask is its ability to translate from Japanese into eight other languages, including Chinese, Korean, Vietnamese, Indonesian, English, Spanish, and French.

Donut Robotics first developed the translation software for a communication robot called Cinnamon but the COVID-19 pandemic put the project on hold. That’s when the team’s engineers decided to adapt its software in a face mask.

Ono raised ¥28 million (or around $260,000) to fund the development of the mask by selling Donut Robotics shares through Japanese crowdfunding site Fundinno.

“We raised our initial target of ¥7 million within three minutes and stopped after 37 minutes when we had reached ¥28 million,” he said.

The company plans to use its funding to develop the technology further and facilitate global communication, eventually adding AR (augmented reality) or VR (virtual reality) features, to help translate from images, not just speech.

“Currently, only sounds and characters are used, but in the future, it will be expanded to image systems (AR, VR, etc). It is a new communication device in the rapidly progressing online and digital world,” says Donut Robotics’ website.

The first 5,000 C-Masks will be shipped to buyers in Japan starting September and will retail for around $40 (or about ¥3,980) per mask. The company is also looking to sell the masks in countries like Europe, the United States, and China after it received strong interest from buyers of these countries.

Check out the C-Mask in action in the video below.