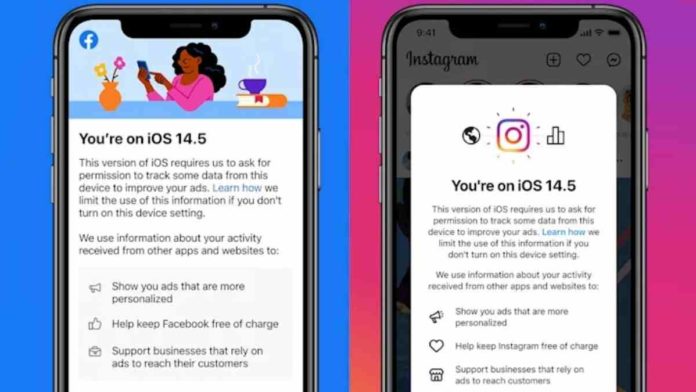 To combat Apple’s new privacy controls in iOS 14.5, Facebook has added a notice within its iOS app of Facebook and Instagram notifying users that enabling tracking not only displays more personalized ads but also supports businesses and helps keep the apps “free of charge”.

For those unaware, the iOS 14.5 update comes with a new privacy feature called App Tracking Transparency (ATT), which was released to the public on April 26th.

The ATT feature requires apps to get user’s permission before sharing their activity and data with websites and apps owned by other companies.

In other words, this feature gives users a little more control over whether or not they want an app to be able to track them.

The new pop-up notices on Facebook and Instagram’s iOS apps were first spotted by researcher Ashkan Soltani in a tweet posted on Saturday (via The Verge).

The popup messages are being displayed for those users who have installed iOS 14.5 on their devices and asking permission from them to track some data from the device to improve ads.

“This version of iOS requires us to ask for permission to track some data from this device to improve your ads,” reads the message, which is the same in both apps. It then provides a link for those who want to limit the use of this information “if you don’t turn on this device setting.”

The message for Facebook app further reads: “We use information about your activity received from other apps and websites to: Show you ads that are more personalized; Help keep Facebook free of charge; Support business that rely on ads to reach their customers.”

For the Instagram app, it reads, “We use information about your activity received from other apps and websites to: Show you ads that are more personalized; Help keep Instagram free of charge; Support business that rely on ads to reach their customers.”

According to Soltani, Facebook is using “scare tactics” to get Facebook and Instagram users to choose to be tracked. These new warning messages basically imply that if iOS users enable app tracking, the app services will be free of charge, or else they might eventually end up paying charges to use Facebook and Instagram in the future.

Despite being a vocal adversary to Apple’s ATT feature, Facebook’s notification screen follows all of Apple’s Human Interface Guidelines regarding the tracking request screen. Also, Apple has clearly stated in the past that it isn’t against advertising per se, and it only wants its users to be in complete control over the apps.

It is currently unclear if Facebook and Instagram are implementing the notification screens or it has plans to do so in the future.