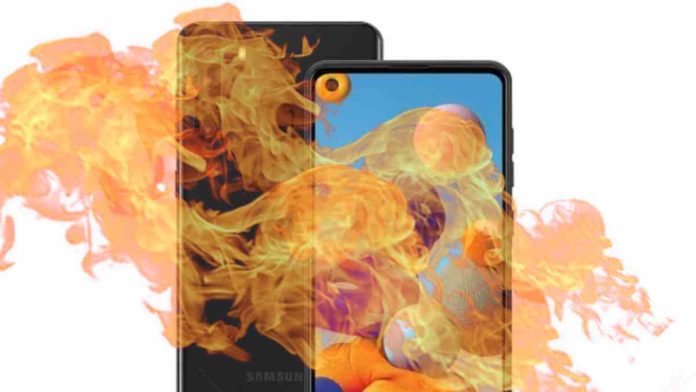 A Seattle-bound Alaska Airlines Flight 751 was evacuated on Monday evening after a Samsung Galaxy A21 smartphone reportedly caught fire in the cargo hold of the plane.

The incident took place minutes after the Alaska Airlines flight from New Orleans landed at Seattle-Tacoma International Airport. The plane was carrying around 128 passengers and six crew members.

As thick fire and smoke filled the cabin, the flight crew had to deploy evacuation slides and carry out an emergency evacuation of passengers. Apparently, the crew on Flight 751 had to use several fire extinguishers and place the device in a battery collection bag to contain the smoke.

Perry Cooper, a spokesperson for the Port of Seattle, confirmed to The Seattle Times that the phone was “burned beyond recognition.” However, it was confirmed as a Galaxy A21 smartphone by the passenger, who spoke with the local police about the incident.

“After much digging, I can tell you that the phone was burned beyond recognition. However, during an interview with one of our Port of Seattle Police officers, the passenger volunteered the phone was a Samsung Galaxy A21. Again, we could not confirm it by looking at the remains of the device,” Cooper said.

Seattle-Tacoma International Airport took to Twitter to post about the incident saying that the fire was contained and passengers were transported by bus to the terminal. The aircraft was towed to a gate and there were no impacts to airport operations.

According to the airport officials, no one was injured seriously during the incident, and only minor scrapes and bruises were reported.

Earlier this evening, POSFD responded to a report of a fire in the cargo hold of Alaska Airlines Flight 751. Upon arrival, the fire was contained and passengers and crew were evacuated from the aircraft. (1/2) pic.twitter.com/rY2cFgrmUH

Update: clarifying incident occurred in the aircraft cabin. Only minor scrapes and bruises were reported.

It is unclear what caused the smartphone to burst into flames, as there have been no incidences of Galaxy A21 devices exploding or catching fire since its launch over a year ago.