This is Xiaomi’s first foray into quadruped robotics for the open-source community and developers around the world.

According to Xiaomi’s recent blog post, the CyberDog is ‘powerful, precise and agile’. It is calibrated with Xiaomi’s in-house developed servo motors that translate into great speed, agility, and a wide range of motion.

With a maximum torque output and rotation speed up to 32N m/220Rpm, CyberDog is able to conduct a range of high-speed movements up to 3.2m/s and complicated actions such as backflips. 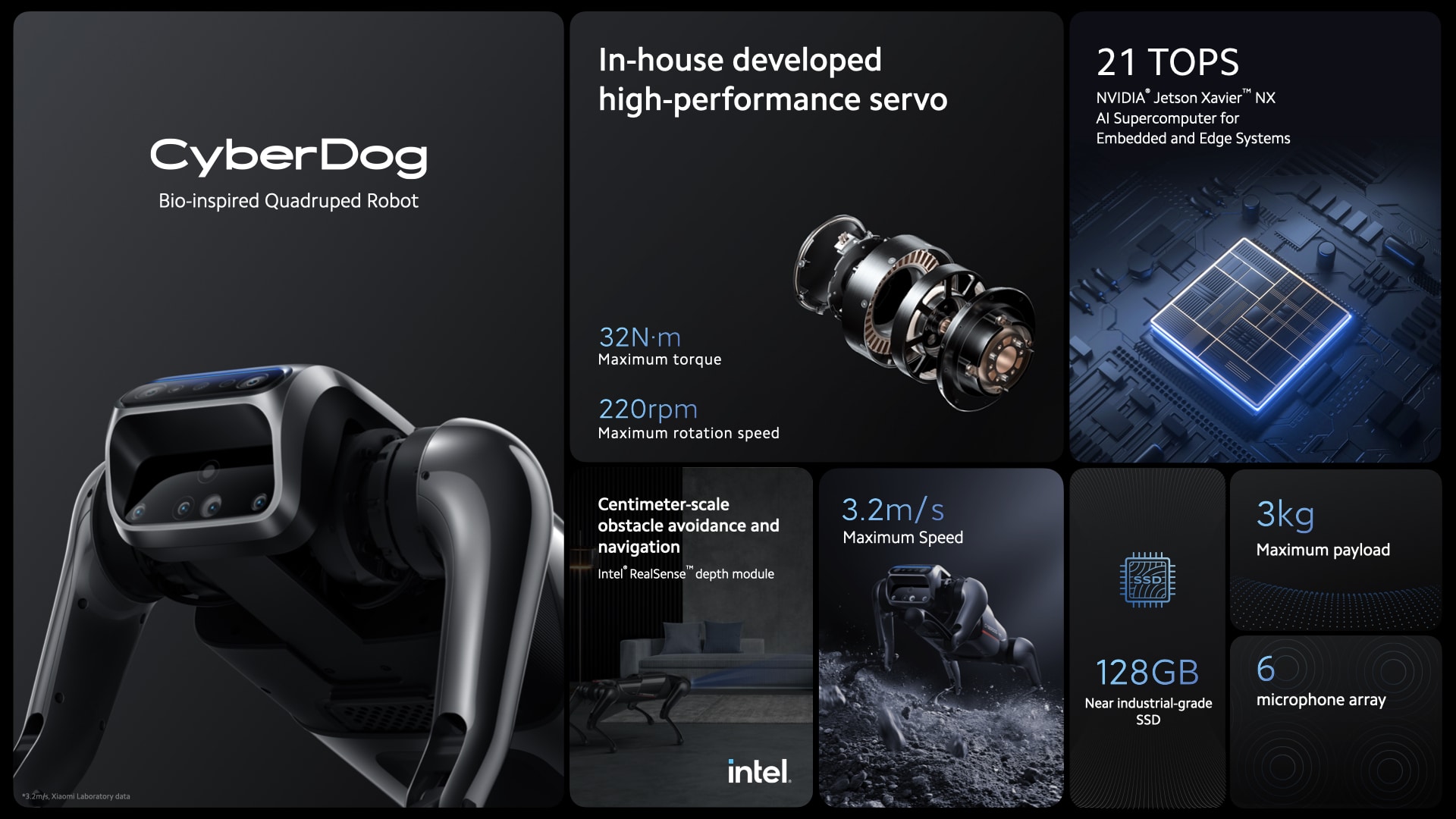 Powered with NVIDIA Jetson Xavier NX platform, the CyberDog’s brain is an AI supercomputer for embedded and edge systems, which includes 384 CUDA Cores, 48 Tensor Cores, a 6 Carmel ARM CPU, and 2 deep learning acceleration engines. For its owners, CyberDog processes massive data captured from its sensor system without a hitch.

To fully model biological organisms, CyberDog is equipped with 11 high-precision sensors which provide instant feedback to guide its movements.

Thanks to Xiaomi’s smartphone imaging technology, CyberDog has enhanced capability to perceive its surroundings.

It comes embedded with an array of camera sensors including AI interactive cameras, binocular ultra-wide angle fisheye cameras, and Intel RealSense D450 Depth module, and can be trained with its computer vision algorithm.

“This means that CyberDog can analyze its surroundings in real-time, create navigational maps, plot its destination, and avoid obstacles. Coupled with human posture and face recognition tracking, CyberDog is capable of following its owner and darting around obstructions,” Xiaomi says.

To add to its pet-like nature, users can use voice assistants to command and control CyberDog by setting a wake word, or simply use its accompanying remote and smartphone app.

Other features of CyberDog include 3 type-C ports and 1 HDMI port to integrate a wide range of innovative and creative hardware add-ons or software systems, such as a search light, panoramic camera, motion camera, LiDAR, or more.

“The advancement of robotics involves various frontier fields and is currently in a stage of global co-creation. Through open-source, Xiaomi encourages developers from around the world to contribute to this field, communicate with each other, and progress together,” adds Xiaomi.

The CyberDog is priced at RMB 9,999 with Xiaomi planning to sell 1,000 units initially to Xiaomi Fans, engineers, and robotic enthusiasts.

The company also plans to set up the “Xiaomi Open Source Community” to constantly share progress and results with developers around the world.

In addition, it has promised to establish a robotics laboratory to provide a platform for engineers to continue the pursuit of future innovations.