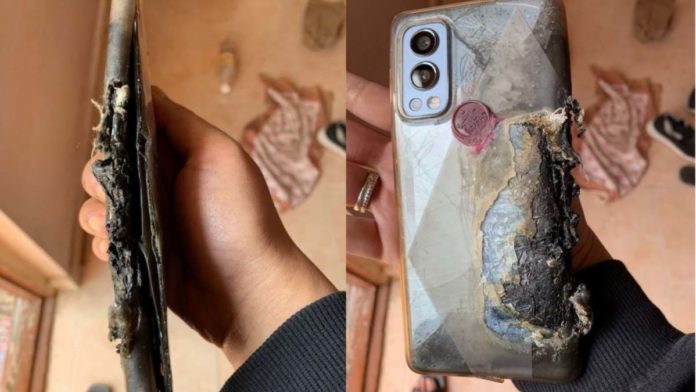 In yet another instance of smartphone explosion, a user of OnePlus Nord 2 suffered severe burn injuries on his right thigh after it exploded in his pocket.

This is the third instance of a OnePlus Nord 2 smartphone exploding ever since its launch in July in India this year.

Suhit Sharma, a Twitter user took to the microblogging site to report the incident on November 3rd. He posted images of the completely burnt OnePlus Nord 2 melted from the left side as well as the user’s burnt-up denims and serious burns caused on his thigh due to the blast.

@OnePlus_IN Never expected this from you #OnePlusNord2Blast see what your product have done. Please be prepared for the consequences. Stop playing with peoples life. Because of you that boy is suffering contact asap. pic.twitter.com/5Wi9YCbnj8

After the initial tweet was posted, OnePlus Support Team contacted the user the same day to connect over direct messages on Twitter to look into the claim.

Twitter user Suhit Sharma in a comment on his original thread on the same day also requested OnePlus to send someone to visit the affected patient in the hospital.

Reacting on the incident, OnePlus said, “We take such incidents seriously. Our team has already reached out to the user and we are in the process of collecting the details to investigate this further.”

On November 8th, Twitter user Suhit Sharma provided an update on the incident and tweeted that OnePlus “is in constant touch with us and R&D team is working on the case we are Co-operating with them to get this resolved asap.”

Later, in September, a Delhi-based lawyer suffered injuries due to the sudden explosion of the OnePlus Nord 2 smartphone in his pocket.