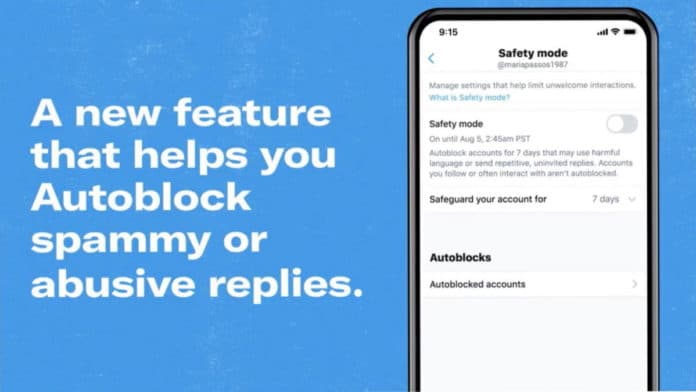 Twitter, the popular microblogging and social networking service, on Wednesday announced that it is expanding its “Safety Mode” beta feature to more users and also more countries to help “collect more insights on how Safety Mode is working and explore ways to incorporate additional improvements.”

The Safety Mode functionality allows users to temporarily block out accounts for seven days for using potentially harmful language — such as insults or hateful remarks — or sending repetitive and uninvited replies or mentions.

If a user receives a harmful reply, Twitter will suggest that they turn on Safety Mode. Additionally, users will be able to see and undo those tweets and accounts that might have been incorrectly autoblocked by Twitter at any point of time.

Those whose account has been included in the beta can test Twitter’s Safety Mode feature via Settings > Privacy > Safety.

Previously, this feature was available only to a small feedback group prioritizing people from marginalized communities and female journalists, but it will now be available to about 50% of (randomly selected) Twitter users from the U.S., UK, Canada, Australia, Ireland, and New Zealand.

Remember when we began testing a new feature called Safety Mode? After months of feedback from beta users, we’re excited to expand this to some of you in several new English-speaking markets to gain more feedback and insights. https://t.co/8TM7S5Zfuj pic.twitter.com/AqVOUwyNQv

For those unaware, in September 2021, Twitter had announced that it has started beta testing the Safety Mode feature to reduce unwelcome tweets and noise that can get in the way of conversations on the platform. It aims to reduce disruptive interactions.

It is currently unclear when the microblogging platform plans to roll out the feature around the world.