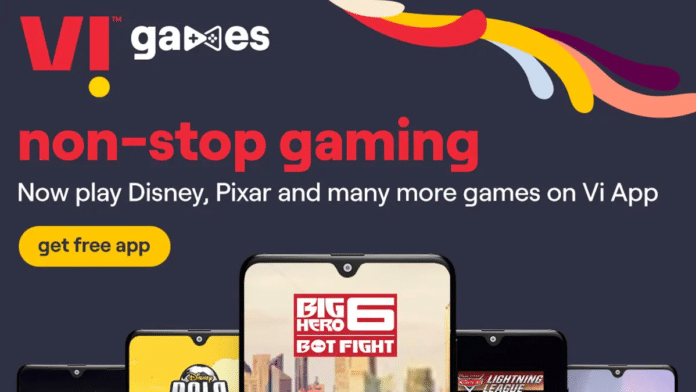 The new Vi Games app will be offering Vodafone Idea users access to over 1200+ Android and HTML 5 based mobile games as part of their new subscription plans. The games will spread across 10 popular genres such as Action, Adventure, Arcade, Casual, Education, Fun, Puzzle, Racing, Sports, And Strategy.

It also has games based on Disney cartoons and movies, such as Big Hero 6 Bot Fight, Castle of Illusion, Ducktales Remastered, and Disney Kickoff, among others.

With the number of gamers in India growing at a rapid pace, it is expected to cross the 500 million mark by the end of 2022 in the country, as per a FICCI-EY report.

The Vi Games will be available via the Vi App, which will separate gaming content into three categories: Free Games, Platinum Games, and Gold Games. As the name suggests, the free games library will include over 250+ games, which will be available for free for all its Vodafone Idea subscribers.

Further, the Platinum Games category will be available as a pay-per-download service via a Pass priced at Rs. 25 for postpaid customers and Rs. 26 for prepaid.

Lastly, the Gold Games category will contain the largest library that will be available to play for free via a dedicated plan, offering 30 gaming titles at Rs. 50 for post-paid customers and Rs. 56 for prepaid users. In addition, postpaid customers with Rs. 499 or above plans will get five free games every month, which will be available to download and play for 30 days.

Vodafone Idea has plans of gradually growing the Vi Games proposition with social gaming and e-sports in the future. The company also aims to expand its games library by taking the total number to more than 2,000 gaming titles.