WhatsApp is one of the most popular instant messaging apps hands down. It is used for texting, sharing photos and videos, documents and contacts, and more.

One of the latest features that are coming on WhatsApp gives a visual cue on the document download sharing ETA on the messaging app.

WhatsApp continuously ups its game in terms of features updates. The recently spotted feature on WhatsApp Android beta client v2.22.8.11 gives a peek into an upcoming feature that shows ETA on downloading any documents shared.

It adds both the percentage downloaded and the time it will take (aka ETA) for the document to completely download on your device. 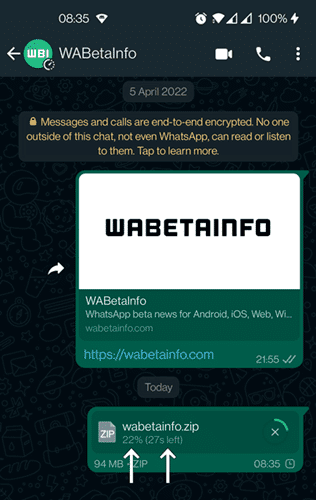 Apparently, WhatsApp is testing out a feature that lets it share files up to 2GB which isn’t something it can do for now. The test is ongoing for selected users in Argentina.

The users will get the ETA on the downloads and uploads alike, giving them an exact idea of how much time it will take for the document to upload or download on the platform.

WhatsApp is expanding with a series of upcoming features

According to the various updates on its beta clients, the instant messaging app is currently testing a feature that lets it playback voice messages in the background. Another feature in the testing phase is emoji reactions and a new camera interface that will replace the interface WhatsApp rolled out recently.

It remains to be seen exactly when these features will be available on WhatsApp (stable version) so you will have to keep a tab on this website to know more.