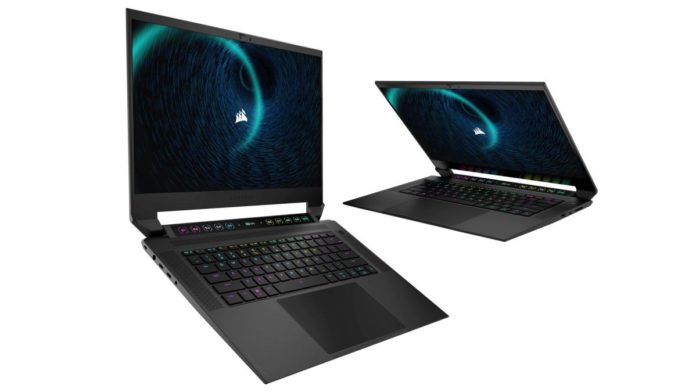 CORSAIR, a world leader in PC gaming peripherals and enthusiast components, unveiled its first-ever gaming and streaming laptop, the CORSAIR VOYAGER a1600 AMD Advantage Edition, during the Computex 2022 keynote.

Other features include a full-sized keyboard with Cherry MX Ultra-Low Profile mechanical switches (in conjunction with membrane for half-height keys), full RGB backlighting, and a 1080p30 FHD webcam.

Additionally, the CORSAIR VOYAGER has a directional 4-microphone array with ambient noise cancellation that clearly captures the user’s voice even in busy environments. It also features an advanced compact vapor chamber cooling system that enables it to stay cool and evenly spread heat by achieving lower temperatures with a thinner profile instead of traditional cooling methods.

Both laptops run on Windows 11 Home operating system. However, a Windows 11 Pro version of both models will also be available. The devices are powered by a 6,410mAh battery with support for 99W fast charging.

“We knew we had to bring something new and different to the table. With our unique position in the industry, we were able to pull from the best of what CORSAIR has to offer – from award-winning components to extensive software integration – to create a laptop that no one else can,” Matthew Hsu, SVP & GM, System BU at CORSAIR.

While the availability has not yet been announced, the CORSAIR VOYAGER a1600 will start at $2699.99 for the Ryzen 7 chipset option and the Ryzen 9 processor model will cost $2999.99.