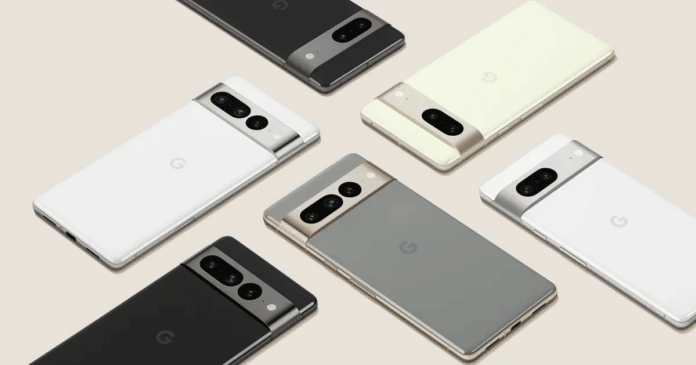 Google officially teased its upcoming Pixel 7 and Pixel 7 Pro smartphones during the opening keynote of the 2022 I/O developer conference on May 11.

While the company did not divulge many details about the devices, an alleged prototype of the upcoming Pixel 7 smartphone has now been spotted on the e-commerce platform, eBay.

The listing of the Pixel 7 prototype was spotted by a Reddit user named u/lucklouie on eBay, who shared it on the Google Pixel subreddit (via Android Police). He also clarified that he wasn’t the person selling the device.

Apparently, the eBay seller who put up the listing of Pixel 7 for sale is supposedly based out of Texas and goes by the name of meetveeru.

Although the listing of the prototype has now been removed, the images have given users a good sneak peek into the upcoming Pixel 7 smartphone months ahead of its scheduled fall release.

The alleged prototype is in line with what Google teased during its presentation at the I/O 2022 keynote and shares the same design language.

The front of the Pixel 7 prototype looks exactly like its predecessor, with a punch-hole display in the top center and a non-curved design.

The upcoming Google devices show a dual rear camera setup that sits on a horizontal aluminum strap, dual-tone finish, and a glossy glass back panel.

Further, the listing also revealed some specs such as 6.4-inch display, 8GB of RAM, built-in 128GB of storage as an option for the phone, and Dual SIM (SIM + eSIM).

It will be powered by Google’s upcoming Tensor chip and will support USB Type-C, 5G, Bluetooth, Wi-Fi, NPC, and GPS.

The phone prototype listed was the “Stormy Black” color variant with the model number GUV6C priced at $450. The phone is running Android 13 and Pixel apps, which according to the seller, is in the “development stage.”

This isn’t the first time Google’s devices have been leaked to the public. With the official launch of Pixel 7 devices still a few months away, we can expect more new information about the devices to be leaked again. Stay tuned for more updates!