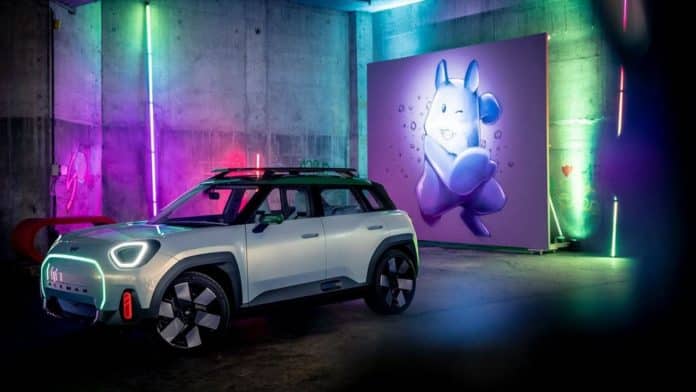 MINI (MINI Cooper) on Tuesday revealed that they were partnering with The Pokemon Company International to create a new special Pokémon-themed model of the electric MINI Concept Aceman car.

The announcement was made during Gamescom’s Opening Night Live event in Cologne, Germany where an all-electric version prototype of the classic MINI Cooper was showcased for MINI fans and gaming enthusiasts.

“A major feature of MINI is the positive and future-oriented approach to individual mobility as well as the distinctive design of the vehicles. Gamification will play an increasingly important role in the MINI of the future and offer a unique experience for our customers,” said Stefanie Wurst, Head of MINI.

“In cooperation with Pokémon, the shared joy of the game brings two iconic characters, that are a perfect match, together with millions of fans. This is how we reach a whole new target group at Gamescom 2022, as an event for modern fandom, gaming and pop culture.”

Stefanie further added, “This concept car reflects how MINI is reinventing itself for its all-electric future and what the brand stands for: an electrified go-kart feel, an immersive digital experience and a strong focus on a minimal environmental footprint.”

The new MINI Aceman is a concept car designed to be playful. The two legendary icons have brought the beloved character ‘Pikachu’ to life inside the electric hatchback, using its Experience Mode. Using this mode, Pikachu takes over the OLED display as the new central instrument, as his face pops up on the main screen to welcome you.

In another loop, Pikachu appears in the display at the start of the car. The famous electric Pokémon launches a bright yellow lightning attack that also travels through the vehicle via the interior doors as well as the apron projection.

The electric model also sports animated pixelated front lights on its bumper, and the LEDs display the Mini x Pokémon branding when you open the car doors.

According to Oliver Heilmer, head of MINI Design, it’s even possible to connect a Nintendo Switch to the car but he was unclear on the specifics. The MINI Concept Aceman also comes with a built-in exterior projector, which lets you beam your favorite Pokémon movie onto a wall perhaps sitting atop the rooftop rack while you are on the go with your friends.

Heilmer said that MINI is promoting a “playful mindset” and its campaign for Gamescom 2022 is “PLAY ON!”, which is designed to promote “an open and diverse society with playful enthusiasm.”

You can watch the video of the new MINI Aceman concept car below: