In July, we reported how Microsoft is planning for the release of the next operating system, Windows 12 in the year 2024.

The company is also rumored to be returning to the traditional three-year release cycle for major versions of the Windows client with Windows 12.

During its recent online Ignite 2022 conference, Microsoft gave us a sneak peek at the next generation of Windows version, Windows 12, although accidentally.

The Redmond giant happened to reveal a UI (user interface) design prototype for Windows 12 when it had put up an image of a Windows desktop running Microsoft Teams. The next version is known internally as “Next Valley”.

Zac Bowden of Windows Central too confirmed that it was indeed a prototype of Windows 12. According to him, the screenshot from the Ignite 2022 conference was an updated version of the Windows UI and not the preliminary design ideas that were exhibited internally at Microsoft a few months ago.

The image below is a manually recreated replica of what the prototype should look like by Bowden, as the screenshot shown during the keynote was fairly low-resolution: 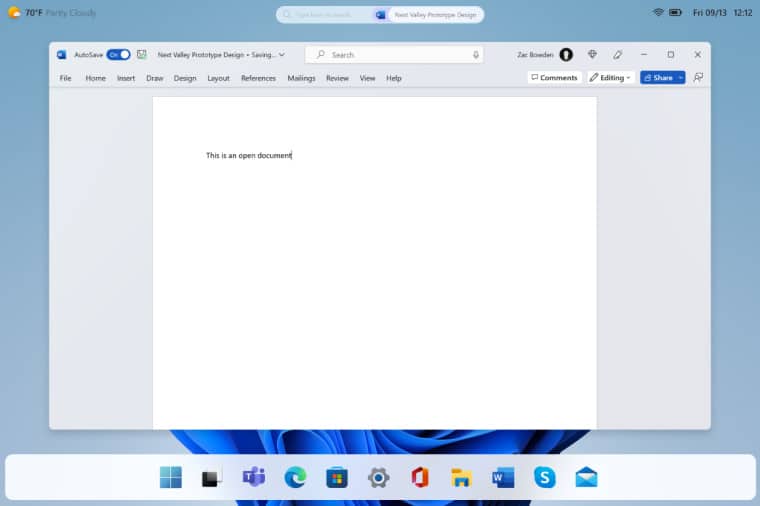 As one can see, there is a floating taskbar with rounder corners at the bottom of the screen. At the top right corner of the desktop, one can notice there are system icons for the Wi-Fi and battery power indicator.

Also, there is a search bar at the top center as well as the weather widget in the top left corner.

Other updates that Microsoft has planned for the next operating system include a new lock/login screen, a notification center, and much more.

According to Bowden’s sources, the prototype shown during the Ignite 2022 event is probably just one of the design goals that Microsoft is working on for the upcoming Windows OS.

Since the next version of Windows OS is expected to ship only in 2024, we can expect many more design changes and improvements to take place before the final version is made public to everyone. Stay tuned for more updates!