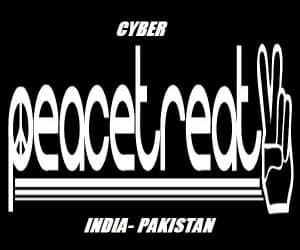 Hacker groups from both country India And Pakistan have accepted the proposal of cyber peace treaty.

And Pakistan- Pak Cyber Eaglez, have Agreed Not to hack or deface each others cyberspace, or no more defacing And Leaking Data.

All the Major hackers from India and pakistan have agreed on case they will not be hacking each other untill any one start first.

The Agreement was done online on Facebook. And Almost All Hackers Participated from both the country.

According To Coded Indisoul Major problem is to Stop Noobs, but the message will be spread soon.

This Would surely Control the speed of the cyberwar going on between India And Pakistan.