TechWorm
Home Bitcoin
Facebook
Twitter
Pinterest
WhatsApp
Mt. Gox which was once the leading bitcoin exchange in the world, went bust in the month of February and subsequently filed bankruptcy proceedings in Japan as well as United States.  The users who had bitcoin balance with the Exchange were using various methods to find out the exact state of their balance.  Today, Mt.Gox updated its website to give its users their Bitcoin balance and nothing else. 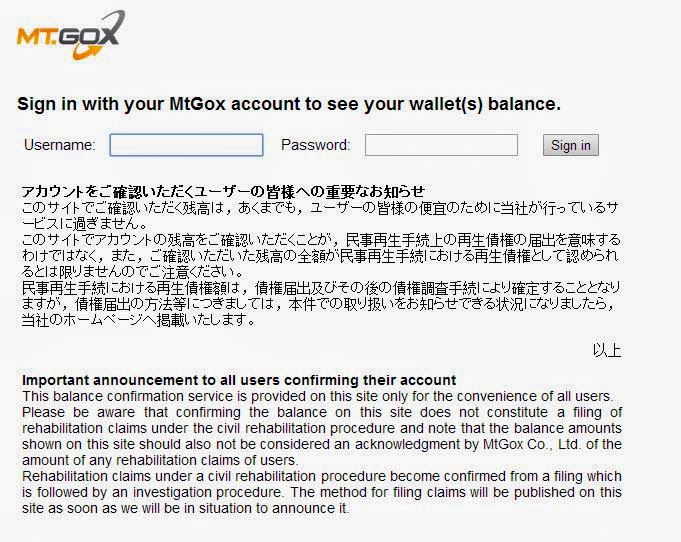 The website which went blank just over three weeks ago, had previously posted occasional updates on the bankruptcy protection details and other rehabilitation processes.   Some time back it had initiated  a legal procedure that may allow Mt. Gox to rebuild and pay back some of its creditors as well as a warn  that a email spam or phishing emails purporting to be from the exchange were in circulation and users need not heed them.
Besides the log-in option, the Mt. Gox homepage carried a statement from the management in English and Japanese saying: “Please be aware that confirming the balance on this site does not constitute a filing of rehabilitation claims under the civil rehabilitation procedure and note that the balance amounts shown on this site should also not be considered an acknowledgment by Mt. Gox of the amount of any rehabilitation claims of users.”
Mt. Gox filed for bankruptcy protection in Japan on February 28, saying it may have lost 850,000 bitcoins which is worth around $520 million at today’s market price to hackers (sic).   It also filed a Chapter 15 Bankruptcy proceeding in the US at  later date.
Few days ago some hackers managed to hack Mark Karpeles’ personal blog and Reddit account and release the dump on Pastebin. The data was later found to be carrying a payload of malware intended to steal bitcoin wallets once downloaded.