TechWorm
Home Facebook
Facebook
Twitter
Pinterest
WhatsApp
Some selfish people have started milking tragic incidents surrounding the mysterious disappearance of the Malaysian Airlines Flight MH370 for their own benefit.  Reports have indicated that Scammers are looking to make benefits from the unfortunate incident of missing Malaysian Airlines Flight MH370 by spreading news about a video of the incident.

MH370 was the IATA Number of the Malasyian Airlines passenger flight that disappeared on 8 March 2014 en route from Kuala Lumpur, Malaysia, to Beijing, China. The aircraft servicing the flight, a Boeing 777-200ER, last made contact with air traffic control less than an hour after take-off. The aircraft was carrying 12 crew members and 227 passengers. The news about the disappearance of Flight MH370 has then been trending from last week over the Facebook and Twitter. But this popularity has unfortunately benefited the certain spammers who have hijacked this tragic issue to profit themselves. 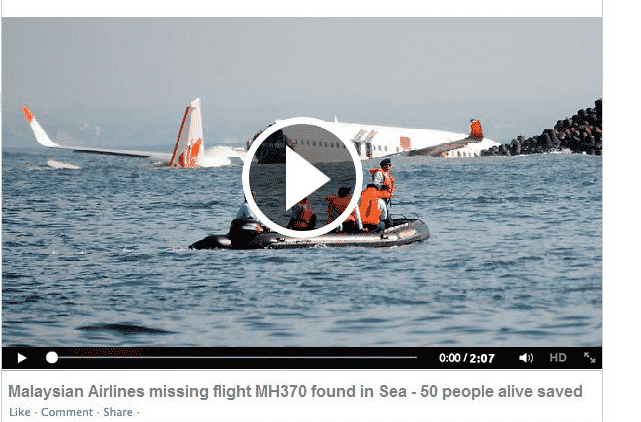 The Headlines about the Flight MH370 including a fake link to the video are being circulated over the Facebook and twitter “Shocking Video: Malaysian Airlines missing flight MH370 found at sea”, “Video of Malaysia MH370 Plane found in Bermuda Triangle! Passengers alive! Breaking news video footage of this miracle just released on CNN!”, “Malaysian Airplane MH370 Already Found. Shocking Video Release Today by CNN”“MH370 Malaysia plane has been found. Shocking videos released today. Last video of passengers crying released”. these are nothing more than spam.

Anybody who clicks these links is redirected  to a fake video website containing lots of adverts generating ad income for the person behind the scam.  However the scam doesnt stop here,  after a series of Authentication requests it asks the victim to fill in the survey which the website says, is part of a security check.

At the end of the survey the victim is usually asked to enter his mobile phone number to continue to the video, which in fact causes the victim to sign up for premium mobile service without his knowledge.

At the end of the survey Victim ends up signing for a premium mobile service and/or installing a fake video player update which is a trojan with a payload of Malware or advert addon for browsers. since the victim allows all the Authentication requests including allowing the app to publicly post from his Account, the link then gets automatically is reshared from his account giving the scammers opportunity to milk another victim.

The scammers who have done the homework for this have made the page  look so genuine that it seems trustworthy at first look.  The scammers have used CNN liberally to prove their point.

Cyber criminals and Spammers have for ages, always been on look out  for hot/popular news to start their spamming campaign.  But this one take the cake.  Using an rather unfortunate and a tragic incident which is yet to be resolved is rather sadistic but unfortunately people are being tricked to believe its real, ending up into the promotion and re-sharing of the spam, In some cases the spammers use victims account to message the link to his friend circle and share it in Groups which he is a member.